Although my horse Zorra is a big, 16.2 hh Andalusian, she has been bullied by other horses her whole life – even horses half her size. Since she came to me a year ago, I’ve had her in with 4 different horses (belonging to friends) and she has been pushed around a lot, but still managed to have a relationship and share affection with these horses.

Then – at Zorra’s urging, I might add – I rescued three horses and brought them to live with Zorra. The two stallions were kept in a separate field until they had their gelding surgery and I felt Zorra would get along well with the gentle, friendly Belgian mare I bought.

But Zorra would not even go near the fence line with any of our new horses! She stayed isolated at the far end of one field – despite them showing plenty of interest and friendliness towards her. What was going on??

My friend Lori came out to visit and spend time with Zorra and she said to me: “Zorra wants a session with Jen”

Jen Snow is another friend of mine who is an energy healer and Reiki Master. She is clinically blind, but she sees energy so well that she can even compete in cross-country eventing (jumping your horse across open fields)!

So, first of all, when I contacted Jen to book a session for Zorra, this is ALL I told her and then she asked me not to say anything more. She said Zorra had already been in contact with her and had been telling her things directly. So all I told Jen was this:

“I’ve brought my 3 wildies down from Coldstream (2 stallions + mare) and we’re having a bit of trouble getting everyone settled in. So Lori was out tonight and Zorra told her, “I need Jen.” I can explain more of what’s going on over the phone or in person, but thought I would message and find out when you’re free to come out to tiny ranch.”

You can watch part of Zorra’s session with Jen in this video, along with footage of what happens AFTER the session:

But I’m also including everything that happened in the session here below, along with the information Jen relayed to me about Zorra:

I said: “But she’s the one who told me to get these horses! I was perfectly happy with one girl, one horse. Then she told my daughter Zara she didn’t want all the pressure just on her and she wanted to be part of a team. So what does that mean?

“Yes, she did want the other horses. But now that they’re here, she’s being triggered back into her past and into fear of losing what she has with you. You have to understand that she is your soul horse. I mean, the others are your horses too, but you and her have had multiple lifetimes together and you are the team that then drives all the rest of what happens. And she’s feeling insecure about that. So you need to do some concrete, physical things to show her that she is not losing you, or her position with you. When you come to the barn, always greet her first. Come and say hello and connect with her first. This will reassure her.

“At the same time, you need to not let her stay in the past, in her old story. Her swollen tendon on her leg is not hurting her, there’s no pain, she’s simply using it to get attention. Because that’s how things worked in the past. So you need to be firm – but gentle – with her. See right now, she is pushing into me with her bum to try to get me to rub her butt. So I won’t. But I won’t get mad, I’ll just walk over here and wait for her to come to me without the demanding, without the pushiness.”

Zorra then follows Jen around for a while with her ears pinned – seriously pissed off that Jen won’t respond to her demands.

Keep in mind that during this entire session, Jen is not just dialoguing with Zorra, she is also running energy, clearing energetic blocks and bringing healing energy into Zorra’s body.

Then Jen says, “You need to come in here for this next piece – which is interesting, this has never happened in a session before – but you need to be a part of this.”

And then Zorra starts pushing into me, asking for the udder rub, or the butt rub.

Jen says, “And the reason she’s asking for these places is because they’re related to her desire to have a baby, she’s not ready yet, but that’s why the focus is here.”

So I just do what Jen has been doing and walk away every time she pushes into me, but with no disapproval, no impatience, simply setting an expectation and waiting for Zorra to shift. 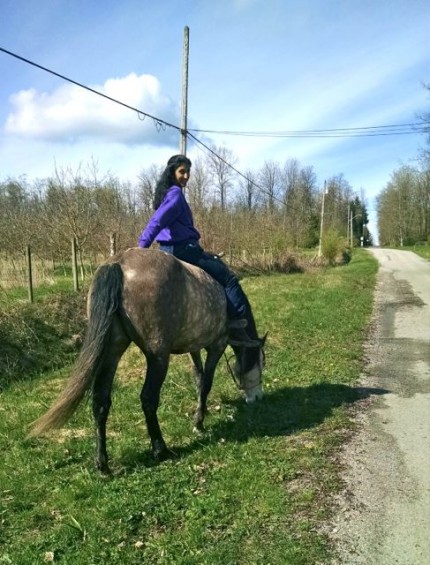 Then I feel the need to verbalize my side of things, “Okay, here’s the thing. I’m feeling really frustrated because I feel like I’m doing everything for her, but first she wants one thing, and then she wants another. For example, the whole riding thing. I waited until she ASKED me to get on her back. And when we go riding in the park she has a FANTASTIC time, her whole body comes alive and she is invigorated – after a 2 hour ride, she doesn’t want to go home and asks to go back into the park again. But when I get on her back a few days later she wants me to get off. AND she develops this swollen tendon. Which she will NOT allow to heal. Zara (my daughter) gave her a healing, came back the next week and said, ‘The healing energy I gave her is just sitting in her leg, she won’t allow it move down into the swollen part.’ And okay, for the riding thing, I did realize she was asking me to not get right on her back, but to walk for a bit first, so that she can loosen up, but more importantly, so that I can loosen my hips up, otherwise she has to work really hard to balance me, so fine–”

At which point Jen jumps in, “Why don’t you just get on at the entrance to the park?”

I say, “Because it’s a 15 minute walk to there and I just want to get going…”

Jen says, “Cause she flashed me a picture of a raised mounting post at the entrance where you can get on.”

And I say, “Yeah, there is. It’s this tiny post that I have to balance on with one foot, but she stands perfectly still and let’s me get on there, no problem.”

Jen laughs, “There you go!”

Meanwhile, as I’ve been venting my frustration, Zorra has been doing some licking and chewing (horsey signs of processing and/or release).

I say, “Okay, but she’s also the one who told me to open my heart and share love with my friend’s horse Spero; that the heart has many rooms. And after I did that, she was even more affectionate with me. And she had no fear of other horses then.”

Jen says, “Ah but they’re not YOUR horses. These 3 are all YOUR horses and that’s why her past is being triggered. But she WANTS to heal, she wants to move past this. And that’s why she told you to get the other horses. Because it’s part of the path you two are creating here. So the best way you can help her is just to give her the physical reassurance that you and her still have the same relationship – so greet her first. And give her time.”

I think for me, it was also important for Jen to reiterate the connection that Zorra and I have – that SHE is the reason I now have 4 horses! She is my partner in driving whatever this is into fruition and that I need to remember that in the midst of the frustration and confusion and trust in that connection. Not second-guess myself that I’ve been mis-reading everything!

I didn’t have much time with the horses the next day, but I greeted Zorra first and gave her the watermelon rinds first.

When I went over to Audelina she said again, “Let her in here.” I replied, “I know you’re ready and I know you love her, I’ll see how things are tomorrow and maybe then. Jen said we need to give her time and she may take up to a week to be ready to go in with you.”

The next day – 2 days after Zorra’s session with Jen – I feel she is ready and I let her into the field with Audelina. You can watch the video (above) to see what happens next… pretty darn amazing!

2019 UPDATE: Amazing news – Jen Snow is no longer blind! This is a healing facilitator that walks her talk and she has healed her sight and regained her Driver’s License. Namaste.