VIDEO: Join Up and Round Pen Training: Fact or Fiction? 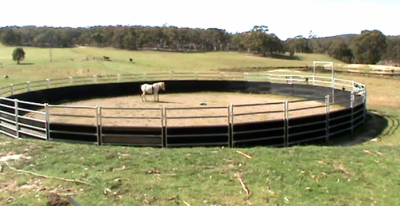 Monty Roberts is famed for popularizing the method he copyrighted “Join-Up”, a method by which a human trainer can take a horse, often frightened, wild or aggressive, and have them following them quietly and submissively in a relatively short period of time. The method was considered so revolutionary that the Queen of England promoted it, and now thousands of horse owners and trainers around the world use some variation of the technique under the general moniker of “Natural Horsemanship”.

Join-Up involves chasing the horse around the round pen with elevated or “predatory” body language, and often with a whip, flag, or carrot-stick as well, until the horse shows signs of what is deemed “acceptance”: licking and chewing, head low, ear to the trainer, etcetera. At this point, the pressure from the trainer is released and the horse has the opportunity to come into the center. Length of time before “join-up” is achieved varies between horses, trainers, and environments, but the eventual outcome is the horse following the trainer demurely around the pen.

The common explanation for this behavior is that the trainer is utilizing “equine body language” to communicate their wishes to the horse. The idea is that, as a lead horse, you are sending the horse away from you. Being alone away from his herd is a horse’s worst nightmare, so pretty soon he’s going to want to come back. Then he exhibits submission behavior to be allowed back into your little herd of two, this time accepting the fact that if he’s going to hang out with you, you’re going to be the leader.

That’s a synopsis off the top of my head from when I read “The Man Who Listens to Horses”, so correct me if I’m wrong. I think I’ve got the general gist of it – which is hard, considering that it’s… well, a complicated and intelligent-sounding form of nonsense.

Recent research by Cathrynne Henshall, MSc candidate and professional trainer, points out that achieving join-up has little to do with your horse-mimicking abilities and everything to do with “applying an aversive stimulus which elicits fear, and then rewarding horses by turning off the frightening stimulus.”

Watch what happens when the human trainer is replaced by a remote control car:

“We believe the results of this research suggest that round pen training may rely on the offset of states of fear, anxiety, or fatigue to reinforce the target behavior of approaching and following the trainer,” said Henshall. “…I certainly felt the ethical dilemma of deliberately frightening these horses, but that’s the reality of what is going on in round pens around the world,” she said. “If it means that people either chase their horses less or think more clearly about what they’re doing so as to minimize that flight response, then this experiment will have ultimately resulted in better welfare for animals.”

VIDEO: Join Up and Round Pen Training: Fact or Fiction?

10 thoughts on “VIDEO: Join Up and Round Pen Training: Fact or Fiction?”