The Empowered Mustang Project: Fight Of The Wild

Note: This is Part 6 in the Series, click here to start at the beginning.

We can feel his boredom. His depression and his spirit shutting his doors. This is not what he has come here for. He did not choose to come to an environment that was going to stifle his purpose, why were we taking so long?… Why was he separated from everything he knew of his homeland?

We MUST catch you. Put a rope on your face. Drug you. Tie your leg to your neck, and brutally cut your testicles off. One by one. THEN you can be with your herd. Then, that edge, that primal instinct to procreate by any means necessary. That primal danger, the fight for your bloodlines will be cut out of you… We put so much attention into the feminine. The feminists have written essays and books and marched to the tops of their voices. Yes, the feminine needs deep healing, and so does the masculine.

For centuries, the masculine has been in his own fight. The fight of pride, ego, protection, possession. Don’t cry. Don’t show emotion. Don’t ask for help. Don’t share how you feel. Don’t lose control. And always prove yourself, even if it means giving up your precious heartbeat.

I watched him closely. I watched both men, the veterinarians practice their fine skills. Even though he was highly drugged… unusually highly drugged, I could see in his eye, the left one, the blue one, the glimmer of the wildness of him. His defiance. His fight. It beamed out of him like a laser, and though he is not all that large physically, somehow he towered over these men. And each time they tried to come close he would get bigger, and closer to the sky… I could tell he was getting tired. His lids getting heavy. His legs bracing for more ground. More ground to hold him up, more ground to swallow these men who held his head, and came at him with needles.

He had been shown this conversation. He had asked for this to be done quickly so he could be out with his forever tribe. His forever herd to call family. His isolation was worse than this pain. Worse than the loss of his ability to pass on his bloodline. He seemed to understand, as both Jini and I would check in with him. Often. This procedure was not conceived without serious respect and dialogue, and permissions.

Jini said, “You asked for the vet to come right away. You didn’t do this the easy way (allowing time to settle in, time to be gentled naturally without forcing). So why are you fighting so hard? Why don’t you surrender and it will be so much easier and quicker?”
He said, “Yes, I know it needs to happen. But if I don’t fight, I will have no honour” And the image came to Jini of an First Nations warrior, who doesn’t WANT an easy death – because there’s no honour in that. He wants to fight hard (which usually involves suffering greatly) before he dies. (Jini has NO IDEA if this is culturally correct, or not! It’s just what she saw/sensed.) 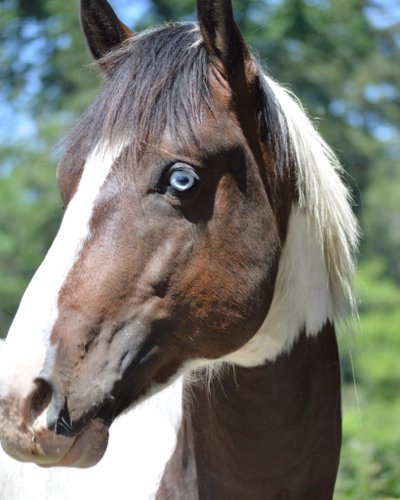 He arrived in the dark. Jini called out to the herd announcing his arrival. They were in the back field, out of sight. We wanted to stay to make sure all was safe in the introduction over the double fencing. But no one arrived – as if to give him space to fully arrive. They knew he was coming. They knew he was there. It was as if those three calls, announcing his name, needed to be thrown out into the world. As if announcing the arrival of a God. Shivers ran up and down my body as his name echoed through the dark woods.
This is no ordinary horse. This is no ordinary herd. What spirit had Jini just set free?

The very next day, he asked Jini to call the vet. And asked again, and again. Finally, she walked over to him and put her cellphone on speaker as she called the vet and the vet said he would come the very next day. The whole time, Makah was yawning, licking, chewing. Giving us visual confirmation that yes, this is indeed what he wants.

The vet comes on Wednesday and is there with him for three and a half hours, but he will not allow the IV catheter to be put in his neck, no matter how much sedative he is given. Jini holds space, meditates, does EFT Tapping, and sings to him. The vet is an excellent practitioner of dominance via pressure-release, so he is forced and bullied in the nicest of ways. The vet sings to him too. Then says that’s enough for one day, and he’ll come back on Friday.

It’s now Friday night. Makah was first sedated at 2:30 pm. It’s now 7:30 pm and the vet has given up on the idea of a standing castration, called his assistant, and they are preparing to give him enough drugs to knock him out flat and do the castration lying down. The herd follows us to the far field where we have open space. If he is going to keep fighting, he needs space. The whole herd is there watching intently. Their worry is evident in facial expressions and body language. Juno, the youngest of the herd seems to be the most concerned.

It was nothing short of fascinating to watch them all communicate with Makah, and let him know that they were all there in support. After all, the three males in the herd had gone through the same procedure, though with much less fight. As the final injection to lay him down went into his vein, the herd started to walk away, as if to leave him in private. As if not wanting to witness the shaming. The taking away of something only they can understand.

He finally dropped. Hard. after struggling three times to stay on his drunken feet. The little feet not big enough to hold his weakening body. And finally after hours and hours of trying to get him down, the vets went to work.

I found myself pacing around, unsure of where to put my body. There was a dog, one of the vet’s. He stayed close to me, seemed to always be at my back. I felt myself going into the zone. It is the place in which, physiologically, the two hemispheres of the brain function in perfect balance. It’s in Alpha and Gamma brainwave states. Perceptions are crystal clear, senses are heightened and information runs along invisible lines to and from whatever it is I put my focus on.

I am asked to put a cover over his eyes, I stand behind him as he is grunting heavily on the ground. My breath begins to work with his. He breathes in, I breathe in. He breathes out, I breathe out, in unison.

I move around, to far enough away, but close enough, facing his head now, and squat down and as we breathe as one, I begin chanting his name like a drum beat quietly in my head: Makah-Mahpee! Makah-Mahpee Makah-Mahpee… This is turning into a ceremony! Of course, it is!! My own body begins to tremble ever so slightly, and I call in his ancestors to surround us. His ancestors of the times when they were the wildest and fierce and free. I call upon his physical body to FEEL the earth beneath him. To FEEL the support of her here, in the past and forever. In this place, time does not exist as we understand.

I feel the dog behind me, he nudges me, so I get up and walk over to where the vet has just finished his last stitch. I begin to repair (energetically) with Makah’s permission, the area of trauma. With my holographic training, I am able to hold the testicles there as they were before. I hold a duplicate of the healthy and whole hologram over the area where they were cut out. I hold a violet beam of light and watch the tiny bright lights, so bright I can barely look. I watch with my mind’s eye as they work to repair the energetic discrepancies caused by the physical slicing of the flesh. As I watch it’s as if nothing else exists. He and I are suddenly just floating in blackness. I see him as an outline. There is no earth, there are no vets, there is no sky, or trees watching. Just us.

Then I hear the drumbeat bringing us back. It’s in my head I know but I can’t help but look around to see if I can find someone with a drum. My eyes are open this whole time. I look around. The herd is still nowhere to be seen.

The vet is trying to trim his feet now. While he is down. Suddenly, without warning, he shoots straight up in the air. He crashes back down, then gets up shaking… I hear a whinny and look to my right and here comes Montaro running towards us. He heard him get up. I couldn’t believe it. Now the whole herd comes running up as Makah slowly regains his strength. And his balance. He is sweating, and it’s getting dark fast.

Finally, we lead him back to his paddock. Finally, he is left alone.

Two days earlier, the vet had come to try the surgery. It turned into a training session with the vet; ways of training that Jini and I and this herd DON’T do. Nothing is done through pressure and release and dominance. We hold a very special space for working WITH them. Giving choice. Developing true relationship.

After the Vet left on that first day, Jini made sure to give Makah choice again. As I did that night when he came in from the ceremony.
I gave him his voice back. I allowed him to say no to taking his halter off, as Jini had shown me to do. I allowed him to say no, you can’t come any closer. I allowed him to say I need rest, I will be good if you leave me alone.
This is what I feel true relationship feels like.
It means to hold sacred what is.
To give voice.
To watch and observe that which we might not believe is possible.
To stay strong and present to GIVE strength.
To move aside the ego, and just be the simple observer.

I myself did not expect to be a part of this. I thought I was only coming to make sure he didn’t choke on his food for a couple of hours AFTER the surgery. But Jini had to leave at 7pm – already late for an awards dinner with her husband. She had allowed 6 hours for a castration that usually takes an hour and a half. But Makah fought so hard it took two days and 11 hours of heavy drugs.

Experience is what molds us and creates our character. I will never be the same after being given the absolute honour to hold ceremony for a Master.
Thank you, Makah-Mahpee
Thank you, Jini.

I close the ceremony in gratitude, in respect for this being. In honour of what lies ahead in the work he came here to do, he chose with us, with this herd, and with you who reads this.
Love, ~ G

Read Part 7 of this series…

The Empowered Mustang Project: Fight Of The Wild

10 thoughts on “The Empowered Mustang Project: Fight Of The Wild”