The horses have given me the same lesson repeatedly:

“Just because we love each other does not mean you should hand over responsibility for your body, or your safety, to me.”

On this day Aude gives my barn helper, Natalie, the exact same lesson… watch as she makes the connection and discovers the important application to her own life.

When the horses give you a physical lesson – one that directly impacts your physical body – their teaching may be shocking, but it is also super meaningful. 1800 lb big mama Aude steps full on Natalie’s foot… but for a very good reason. Don’t confuse love with owning responsibility for the safety of your own body – they do NOT go together!

As humans, we may wonder how people stay with people who abuse them. One reason I’ve heard often is, “Because s/he loves me.” Or “Because I love her/him so much.” But what the horses teach is that although humans tend to put these two things together in one basket, they absolutely should not be.

How can we stay in a love relationship with someone, yet not allow them to damage our physical (or emotional/spiritual) body? When you start to ask this question, and allow yourself to think outside the box… you may come up with some innovative solutions.

I went through some difficult, abusive years with one of my teens – many people were telling me to kick him out of the house. To show him “tough love” and it would be the best thing I could do for him. At the same time, Montaro showed me how Jax and Juno harassed him and the herd multiple times per day… sometimes multiple times per hour. Montaro kept running them out of the barn to show them their behaviour was not acceptable. But, he pointed out to me, he never ran them out of the herd. He never made them go live in the woods until they learned to behave. 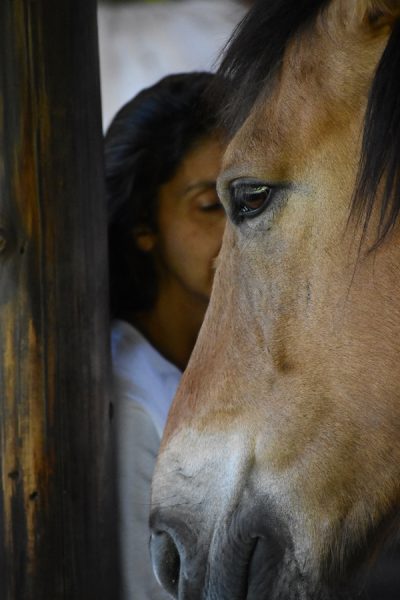 “How many years have I been doing this?” He asked me. “Over and over again. Of course it’s exhausting… and how many years still to go? I’ll do this for as long as it takes.” I felt the gravitas of a true leader. Of one who is called to rise, over and over again, without ceasing. Cause it ain’t over, till it’s over. Although we made our son live with my parents for a couple of weeks, we never again considered ejecting him from the family home.

Of course, simultaneously, Montaro was also teaching me the skillset required to deal with an extremely angry, volatile youth. In fact, if I look at that time through spiritual eyes, I perceive that Montaro and my son were actually working together to coach/support me to rise to a whole new level of functional power. Montaro would teach me something at the barn, and as I drove home I knew that the second I walked through the door, my teenage son would hit me with a chance to practice what I’d just learned.

I learned to always stock my truck with food and to rest on the drive home. To not walk through the door tired and hungry, but to enter the house with some bandwidth still left, to deal with what would come.

I installed security locks on 2 of the bedroom doors so I could lock myself and my other kids inside when I needed to. I kept my purse with me so I could yell to the younger kids and be out in my truck and driving away at a moment’s notice – often at 1 or 2 a.m. We knew where the all-nighter gas stations were so we could swing by and get snacks. My other two kids actually loved our night drives.

One time, I called the police – my son heard me calling and took off, but that’s fine, he received my message about how far was too far. I called on my brothers and my father for help and counsel. Because, these incidences usually happened when my husband was away on business, or taking our younger son to soccer tournaments.

But even when he was at home, these altercations rarely involved my husband. Because it wasn’t his path to walk. My son was calling me to rise, to become more empowered, to ascend out of Victim – and he tag-teamed with Montaro to teach me how.

Eventually my ability to set calm, healthy boundaries grew to the point where I could walk into a party of drunken, stoned, 18-year-old young men at 3 am and say, “Alrighty, party’s over, let’s go – everyone out.” Just little me, with a garage full of rap music and macho youth towering over me – and calmly, but surely, get them all to clear out and go to sleep for the night.

Often, the more highly sensitive (and/or spiritually perceptive) the child is, the more violent they can become. When the chemicals of junk food, drugs, and alcohol combine with hormone spikes, these teens can get seriously difficult and dangerous. I think we’re already experiencing high levels of teens abusing their parents (but no one’s talking about it) and perhaps kids on the Asperger’s spectrum are even more difficult to deal with.

The irony of my situation is that my primary concern was not that my son would hurt me; but that I would hurt him. I trained martial arts intensively for seven years – up to 6x/week – in my twenties. So I had developed reflexes that were literally spontaneous. From being physically abused as a child, I also had a rage-trigger in me. Although I’d done a lot of healing in this area and that river of rage was down to a trickle, it was still there.

If I allowed my son to escalate conflict to the point where he triggered my rage or my reflexes, then I was afraid of seriously damaging him. As a lightweight female, you are not trained to fight punch-for-punch with men. You have to use ‘disabling techniques’ which often involve breaking bones or smashing vulnerable tissues. And then what? So even though the average female might be afraid of getting hurt, being afraid of hurting your own child is the flip side of the same coin. The reality works out the same. And the necessity of learning how to set calm, healthy boundaries is just as crucial.

Are we willing to go beyond the perception of ourselves as Victim, even though we are living with, or in relationship with someone who is behaving abusively? Are we willing to take a spiritual view of things and look at the deeper ‘why’ of what’s going on? Are we willing to recognize that love and safety are two completely different things? And no matter how much we love someone, we should not allow them to push on, or push through our boundaries.

While my son was flying off the rails on the one hand, on the other hand, he was coming to me late at night when everyone else was asleep (sometimes up to three times a week) asking to do Tapping sessions. He was actively seeking his own healing and transformation. And again, thank god I had the tools to be able to assist him. This is the other aspect of healthy boundaries – they create a space of safety for both parties. A space where the aggressor can then ask for help – instead of reeling through life untethered and alone.

Today my son and I have a beautiful relationship. I can talk to him about anything and often seek his wise counsel. When we have conflict, we are able to negotiate a win-win solution fairly quickly. Aside from his messy room, I’ll be happy if he never moves out.

The horses – and life – call us to mastery. The journey is always worth it.

7 thoughts on “Horse wisdom: Love Does not Mean Safety”