Is Your Horse Food-Focused AKA Treat Crazy? 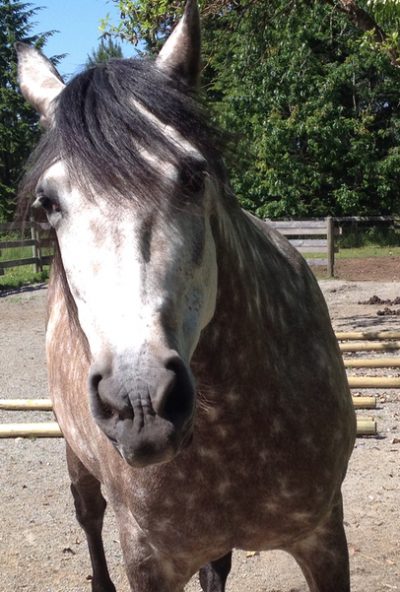 When my new mare arrived, some people called her “food oriented”, I called it NUTS! She used to be so crazy for treats that I was thinking about getting her a big bag of carrots and dumping them in a bucket for her to gorge herself on. I wondered, if she could experience abundance and no scarcity, would that release her from treat mania?

However, I also wondered if a large amount of carrots could cause a serious, or acute health issue, and then I found this very interesting tidbit from Dr. Deborah Carley at Thunderbrook in the UK:

“FACT: Raw carrots contain only 4.7% sugar and 1.4% starch. Carrots are 85% water! Compare that to average hay at 8 to 10% sugar, and non molassed sugar beet at 5 to 8% sugar. One extra large carrot weighing 85g contains just 4g sugar! In the 1950’s, healthy horses with no exercise had a typical diet of 12lb of hay, 2lb of bran, 4lb of oats and 7lb of carrots. (This type of diet was fed to horses in little exercise in the 1990’s with no ill effect, before commercial bagged feeds became really popular).”

Well, considering that 5 g of sugar is 1 teaspoon, that still seems a lot of sugar to me. But the 1950’s diet she listed is also interesting and would tip quite a few of today’s horses into laminitis… so I’m wondering if the 1950’s diet was okay because the amount of hay fed (12 lbs) was so little? My horses eat about 30 lbs each of low sugar hay (10% NSC or less) in a slow feeder per day. They are in great shape and very active, running around together.

But I also wonder what creates “treat franticness” in horses, and whether it correlates to the sugar content of the treat? Although, some horses are much worse than others, so maybe it’s not related to the sugar content, but rather to behavioural issues? Perhaps when treats are used to manipulate/coerce/bribe the horse, although the horse will do what you want, the energy surrounding the encounter is still resentful, or stressful. And this negative state gets linked (through repeated experience) to the treat.

Or perhaps treats are used to symbolize love and approval. Again, okay… but not great. I think we’re then getting into human self-esteem issues. Why are we – just ourselves – not enough? Maybe we should risk just becoming still and quiet – perhaps do our own meditation practice out in the field, and see, over time, whether our horse wants to connect with us. Just as we are – no treats, bribes or rewards. 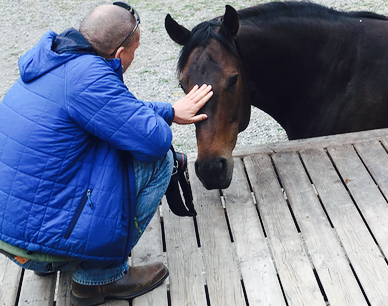 I was at a retreat once where one of the participants was having a lovely connection with a horse. It was such a beautiful moment, I pulled out my camera to capture it for him. When all of a sudden the horse’s owner burst across my screen with handfuls of carrots for the horse. And guess what? Yep, their beautiful moment of true connection – just soul to soul – was lost. The horse’s ears pointed back as she grabbed greedily at the carrot chunks.

I wondered: What was this woman’s (the horse owner) internal state that she couldn’t behold the true connection the horse and man were experiencing? And also, what was driving her to burst into a lovely, peaceful moment with a frantic rush to provide treats? What did those carrot treats symbolize to her?

Are treats good or bad?

I don’t think this conversation needs to be about good vs. bad. Because with treats – like most things in life – I think context is everything.

If your horse will not be with you without treats, then I believe you’re shortchanging both of you from experiencing true connection.

When my Andalusian mare first came to my place, she expected to receive treats when humans showed up. She would get pissed off at me for not having any and butt me with her head, “Oy! Give over! Where’s the dang treats??” It took SIX months of not giving her treats from my hand – I would put a cut up carrot or apple in her supplement bowl instead – for her to stop bullying me for treats.

Once she no longer expected them and was truly connected to me – would follow me, or play games unhaltered, or go for walks with the lead rope draped over her back, just walking side by side – then I brought them back in for specific purposes, from time to time.

However, the really interesting thing is, her previous owner said she rarely gave treats by hand… So where did this expectation for humans giving her treats come from? Maybe she was given treats from the trailer guys throughout the 5-day journey from New Jersey to Vancouver. I know they sure had grown fond of her by the time they dropped her off to me! We’ll never know.

Or maybe treat mania is just a personality thing? Just like some kids are crazy for chocolate, but others prefer chips. Or some people really love to eat (me!) whilst others just grab fast food on the go.

Maybe (as in humans) it’s related to gut flora? The higher the proportion of ‘bad’ bacteria and yeast, the more intense the sugar craving.

Not all treats are created equal

In this video, you can see how equine behaviorist, Emily McDonald, uses grass chaff (a low frustration treat) to train her wildies how to lead for the first time. Start watching at 2:35 minutes:

You could chop up some hay to create your own grass chaff, or, as Emily points out, you can use scratches instead. Scratches are what I used to train my wildies to lead. I used a different method to Emily’s – I taught them to walk forward, left, right, stop, back, using hand and voice signals. Then, I added the lead rope so that they could understand that when I pull gently on their head, it means walk/turn this way, etc. (with scratches for the reward again). I think both ways work great and are not stressful for the horse.

However, when Kesia comes to do ‘hoof training’ with them – getting them ready to pick up their feet and hold them to be trimmed – she uses carrot chunks. The horses have come to view her arrival as a very special event and they eagerly await their turn to be allowed into the paddock, one at a time, for carrot training!

Except for baby Juno who just had his first hoof trim at 2.5 months using only scratches as his reward. Kesia had only worked with Juno once before, over a month ago – asking him to pick up his feet in exchange for a scratch. Then once he was comfortable lifting them off the ground, she asked him to hold a foot up for a few seconds, in exchange for more scratches.

During this visit, she again used only scratches as the reward for picking up and then holding a hoof up. Juno quickly progressed to holding each leg for Kesia to rasp. From start to finish she spent about 15 minutes with him.

A horse trainer once told a story about a woman who got her breast bitten off; because she always kept treats in her left breast pocket and one day her horse just went for the dang treats!

A friend of mine was talking with one of the trainers who worked on The Horse Whisperer film set. He said that some of the staff were feeding the horse a bucket-full of treats every day – carrots, apples and horse cookies. He told them to stop, he kept warning them that this was not a good idea (because of the sugar intake). Then the horse bit Robert Redford’s cheek so hard that filming had to be halted for two weeks. Redford did not have a treat in his hand, the horse was just so amped-up from the sugar load. Now that’s an expensive lesson to learn!

A few weeks ago I had collected a few bags of windfall apples from a neighbour’s tree. So I was giving my herd 2-3 apples a day in their supplement dish as a special treat. After a few days of this, I noticed the herd was jumpy and over-reactive – especially Zorra (my Andalusian treat-monger mare). Was it the weather? Were the coyotes getting braver and going after them at night? I had never seen them so jacked-up.

Then the woman who lives on the property wandered back and told me how she had a few big bags of windfall apples, so had been throwing them into the field for the horses. Aha! So between me and her, they had been getting 5-10x their normal sugar load! And yes, it had a noticeable (negative) effect on their behaviour.

Go with your gut!

I also think that when, or whether, to use treats (a reasonable amount!) changes from horse to horse; and also changes over time, and changes according to task.

I may use only scratches with my herd as a policy. However, maybe one of my horses has a lot of fear or difficulty with a certain task, or really negative prior experiences. In that case, I may use treats for a time to give the horse enough motivation to open to a new way of experiencing that event. Because unless my horse chooses to participate, I am just repeating, or entrenching, the existing negativity or trauma. The sight and smell of a carrot chunk helps them choose to participate.

So in cases like that, making the reward worth the pain is the most positive, relationship-building thing I could do.

I use the same technique with my kids! I say to them, “Okay, what would make it worth it to you to do X?” My child thinks about it for a while and then says, “A slurpee from Mac’s.” Okay, done! My kid now does X with no argument and in a positive frame of mind because the focus on the treat enables them to get past their resistance.

So again, we’re back to the concept of listening to your horse, rather than trying to adopt a set method or policy.

When you listen to your horse and you go with your gut instincts, things are fluid and dynamic – you leave the chimera of prescribed safety, or ‘doing the right thing’ and you enter the beauty of flow. True intimacy with horses (and humans!) is all about flow, and being response-able to what is best, or needed, in the moment. 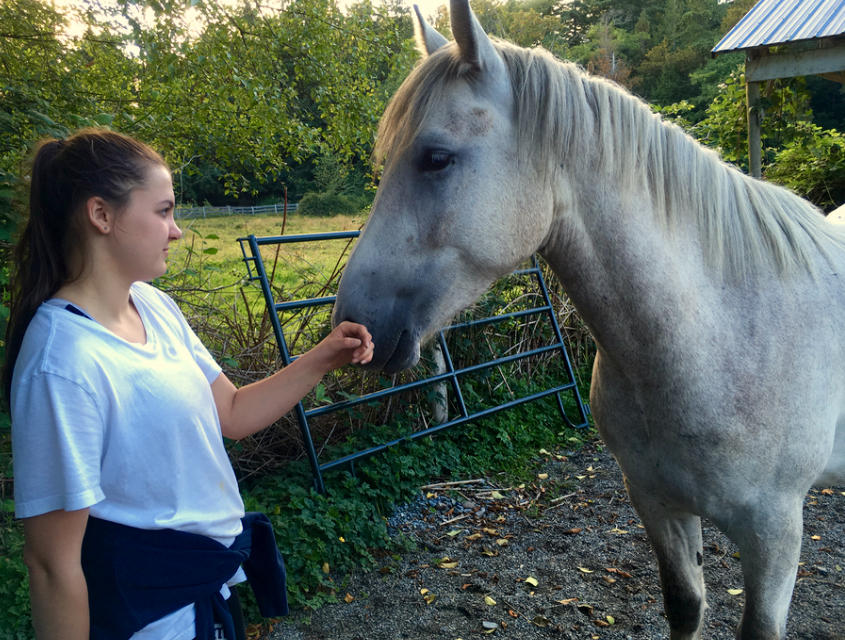 Is Your Horse Food-Focused AKA Treat Crazy?

5 thoughts on “Is Your Horse Food-Focused AKA Treat Crazy?”