Tiah was fine until 8pm three nights ago. I noticed on our walk back from romping around the forest that she was walking really slowly. Then as nighttime came she began panting and her belly was spasming. She’d had an extra long, heavy heat cycle this month. And then had mated with Timber at the barn 3 weeks ago. My son hadn’t realized she was still fertile and had taken her with him to do the horse chores. She and Timber (the resident, intact male dog) disappeared to the back pasture for 45 minutes, so we were pretty sure she was impregnated. 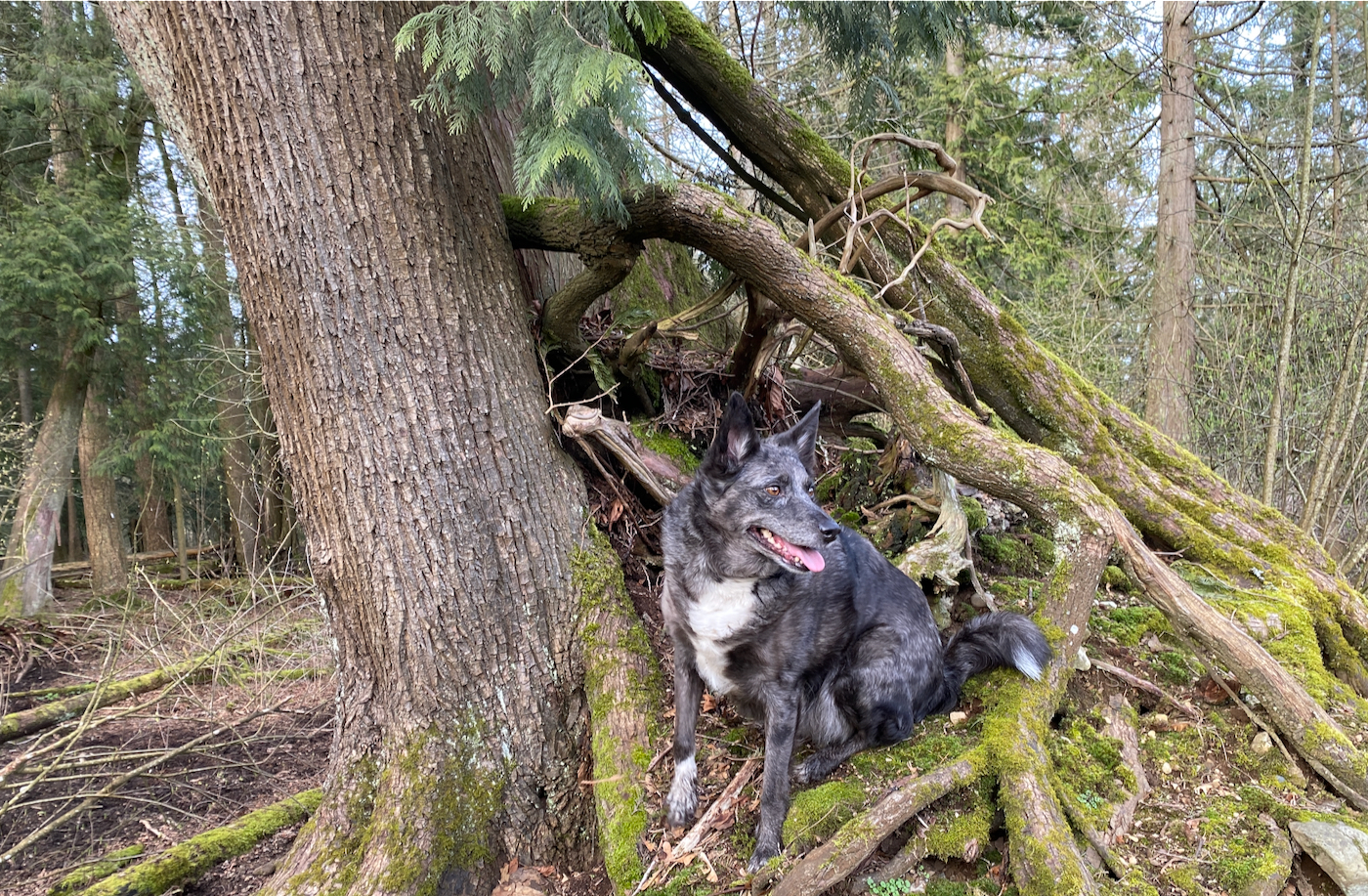 At this point, she was 3 weeks pregnant. She’d had some episodes of fatigue (consistent with pregnancy) and some random panting (again, numerous sites said this occurred during pregnancy) in the last 10 days, and so I wondered if she was getting ready to miscarry or something.

Around midnight she vomited bile and then vomited clear, foamy saliva a few more times. By 3 a.m. she couldn’t walk upstairs, so we carried her up. Zara stayed up with her all night and woke me at 7 a.m. to tell me she was no better, and could no longer drink any water without vomiting. So I took her to the Emergency Vet Clinic. Long story short, the vets couldn’t do much to help her as she had a severe uterine infection (pyometra) that would have to be stabilized with IV antibiotics first and then surgery after/if she stabilized. They felt her chances of surviving both interventions were very low and price of course very high. I chose to bring her home to die on the earth, in the sunshine. And she passed about 3 hours after I got her home.

Zara and I carried her outside to lie on a blanket with us in the last of the Autumn sunshine, but she got up and walked under the Black Locust tree to lie down hidden by its thorny branches, about 10 feet away from us. Another sign that she was getting ready to transition from this plane of existence. At one point, I got up to sit on a rock about 2 feet away from her and she heaved herself up to move to the other side of the tree, putting 4 feet between us. Message received. I believe she needed physical distance to help her 3D body/personality let go of this realm – her ties to Zara and I were so strong.

As I sat near Tiah and midwifed her death, I didn’t want her to suffer anymore – sepsis and organ failure is not an easy death – so I searched for a vet who would come to the house and administer euthanasia. There were only 3 vets who would service our area; one was on health leave, the other on holidays until Oct. 11th, the third did not work on Thursdays – the day Tiah was dying. Did Tiah know all this when she chose her death day?

I worked with Tiah to create separation between her conscious mind, her soul, and her physical body. To pull her consciousness up and out of her body to the Observer position – where she could witness everything that was happening, but didn’t have to feel it. As you may know, I have all my dental work done (extractions, crowns, jaw surgery) with no anaesthetic because I developed this technique – you can feel what is happening, but it doesn’t hurt. Pain does not have to hurt. I had never done this for someone else before though, but my connection with Tiah, and her surrender, was strong enough that I could perform this service for her.

Zara and I then had to help her spirit leave – her physical body was so strong and held on so tight. The way I see it, the soul is held in a kind of webbed womb/case/container. And I had to go in and loosen the weaving, stretch it out, create some space, for her soul to slip out. Smart medicine woman that she was, she had positioned herself on a downward slope, so that when she vomited near the end, she wouldn’t choke on it.

After she released her soul and took her last breath, we both knew we couldn’t touch her for a long time – about 30 minutes. Like our touch would give her strong body the ability to yank her spirit back in. So we kept working with her spirit, cutting cords, giving gratitude for her life and gifts, releasing, giving her permission to leave, etc. When she was finally GONE gone, we held ceremony with drum and sage and Zara placed her death rocks on her body. Her eternal blue glowing self was draped around Zara, covering/cradling her from behind.

Kumba came home from the barn about half an hour later, with Oscar. He was bouncing and HAPPY, like Tiah was with him. Der. We took him out to the body and he sniffed her and all around the area, gathering the story. Then lay down about 8 feet away where he could see her while I stood there observing him. After 5 minutes or so, I started walking to the house and he bounded happily after me, excited to get his bone for the evening.

Guliz sent me a video of the horses at the ranch, bucking and running around like crazy at about 5pm – which is when we were in ceremony for Tiah. Interesting to note, I got Tiah just before I got Zorra. So she stayed with us for 7 years through the journey of all 11 horses, purchasing the ranch (no small task!) and getting the horses onto the ranch. She transitioned on October 7th on the New Moon. Perhaps one of her main objectives coming here was to help me make all that happen and support me through the tremendous challenges.

Tiah is the first one of my animals to die, without giving me any warning. All my other animals have told me when they’re getting ready to transition. So her death slammed into me like a freight train. I don’t know why Zara and I had to walk this pathway for her death, but I trust Tiah. Kesia wrote to me:

“There is something in being pulled without control into deep grief. It expands us, humbles us (as in humus… brings us closer to the earth), draws from us more raw power than we could ever intend… it’s just SO MUCH and we could never consciously choose it, except by agreeing to love as deeply and entirely as we can.”

As per usual, our beautiful Kesia manages to language the essence of it all.

20 thoughts on “Tribute to Tiah”