Rewilding the Herd – Getting There

Several weeks ago I wrote about the vision of this journey I’m setting out on with my human-and-critter family: buying the land and living the dream. Or, whatever the dream looks like when it lands on firm ground and becomes reality with all its challenges and surprises. Here’s the next installment (Part 2). Enjoy!

The last few hours of a long journey stretch into maddening infinity, and even though I know better my drama-prone mind extends this temporary discomfort into endlessness, each kilometer marker on the highway reminding me that though we may be closer, it’s only by a tiny fraction of the whole. 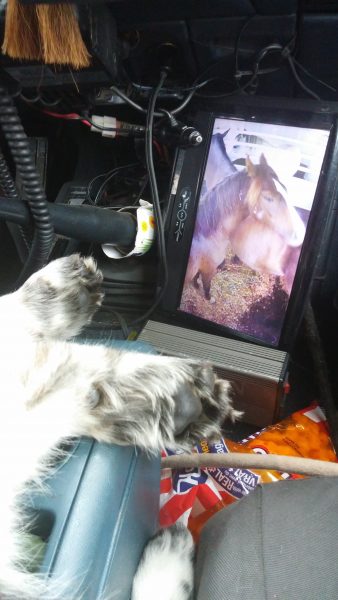 The trailer cam shows the same horses in the same stance as it did 19 hours ago when we left the island: Spero in the front stall riding backward, Amalia in the back riding diagonal, and Firefly with her, crossways and braced with her head over her mother’s withers. The only thing that’s changed is their gradual fade from alarm to exhaustion. We stop every few hours to let them unbrace their limbs, eat and drink, but they stay on the rig as we push on without a layover, the simple logic being to just get it over with. I don’t sleep, but for the first time in my life I experience “nodding-off”, coming to when my forehead hits the window, again and again and a-bloody-gain.

I have to believe that my horses trust on some level that their human is looking out for them, that they won’t actually spent eternity in this cramped incarceration, speeding across the earth. I hope they believe it, anyway, because it’s getting hard for me, the one with the frontal cortex, to keep believing. Jini and I often talk about the distinction between animal self and higher self (for lack of better terms), and that’s what I’m thinking about now. While the horses and our deep connection are what have driven these huge life changes, and our higher selves are partying on the roof and high-fiving all the way, our poor animal selves are trapped and desolate and afraid. I say that but, watching my stoic beauties on the digital screen (which is both a blessing and a curse to have, as I have been glued to its dull glow, obsessing over them the whole time), I think we’re all holding it together pretty well. And we are moving steadily north and west, heading home.

In the weeks leading up to the move, I felt the horses quietly preparing. I was almost entirely unavailable to them, working as much as possible to save some money, getting in final visits with the friends and community I’d found, and wading through my end of logistics for moving, purchasing land, and getting several thousand pounds of precious livestock across 1200 km of ocean and highway. I was wrapping up not just a chapter of my life, but an entire era, a quarter century during which I was moving slowly, sometimes blindly, towards what I wanted most in the world (read: LAND!). I was leaving behind my security, my story thus far, my new and old friends, my partner, and the land that had always been my home, the Southwest coast of British Columbia. The horses saw me briefly every day, distracted and rushed, apologizing once again as I ducked away from them before we were done with each other. Remarkably, they gave me space, didn’t clamour for attention, didn’t fight amongst themselves, didn’t destroy their paddock, didn’t get injured, didn’t ask anything more of my than I was capable of giving, when I was truly less available than ever. And for that I am humbled and thankful.

As I am now, despite my complaints, in the comfortable cab of this hired truck and trailer, with our incredible and steady driver, Kevan, who seems to survive off coffee cake, cigarettes, and the occasional 20 minute nap. There are seven of us – two humans, three horses, the new puppy I managed to acquire in the crazy weeks leading up to this, and my mother’s cat. The latter was a last minute addition, one of three felines who slipped away as the others were being caged and loaded into the UHaul that my mother and brother drove up last week. This cat was carefully lured and captured by the neighbour and my dad, who drove her out to the ferry terminal and met us in the dark of a gas station to hand her off on our way through.

Just one of the many, many weird moves we’ve pulled off by keeping calm and carrying on – I haven’t mentioned the endless plans, logistics, and details that have gone entirely awry since we committed to buy this land. At every single turn, in the most incredible and asinine ways, things have fallen apart both literally and figuratively. Papers missing, electronic files failing, trucks breaking, miscommunications, lost ID, on and on. Eventually you run out of f***s to give, as the kids say these days, and you just take it as it comes. Turn and face this next challenge, meet it, move with it, send it on its way. It’s Aikido in daily life. You’re already rocketing towards your destiny, all you really have to do is not get knocked off track on the way there.

In any case, of course we are finally getting there. As we pull up the driveway I feel nothing, just the mechanical knowledge that we will finally stop moving. Our brave guide looks none the worse for the wear (he used to transport full time all across the continent, this really ain’t no thang for him), and he drops us all off gracefully, picks his trailer out into my eventual garden area, and off he goes to the next town and job. The horses go into a small barnyard grass paddock for the night to recover and get their bearings. The rest of us tumble into my mother’s arms, eat, and fall asleep.

And in the morning, I let the horses out into their new home… 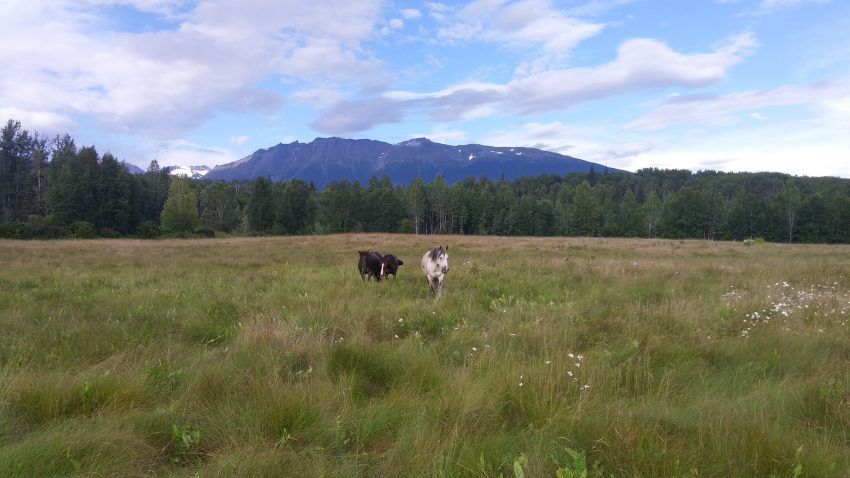 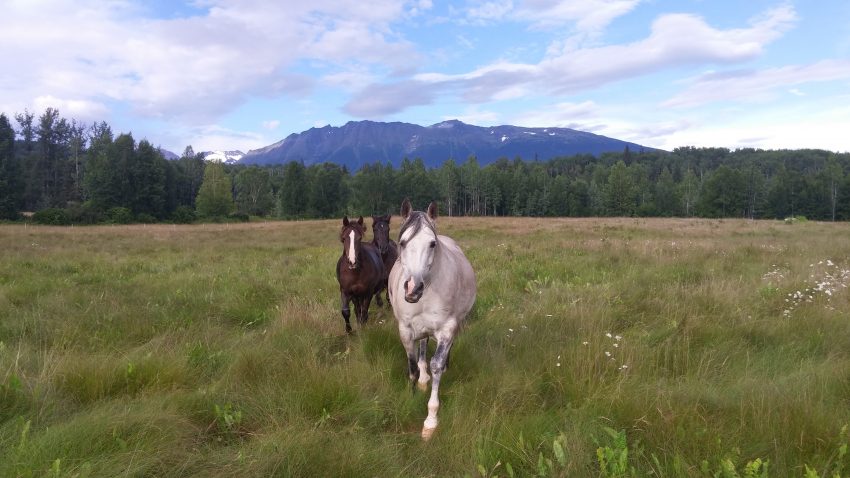 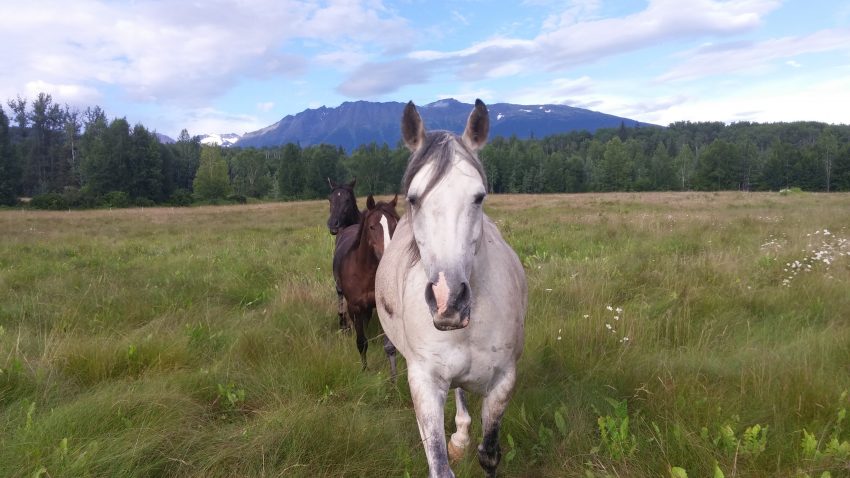 They run for hours, disappearing and reappearing  over hills and around trees, exploring wildly at 40 kmph, bucking and tossing their manes and just running because they can. At some point I realise I’m crying, then sobbing, completely filled with wonder and relief. The horses vanish entirely for a while, then pound, triumphant, back toward the house and barn, before wheeling like heavy swallows for another round. They’re free, and so am I.

Every night after that, as I drift off in my canvas tent bedroom, I hear their hoofbeats thundering by in the northern half-light.

Stay tuned for our ongoing adventures as we settle into the wild north!
Click here for Part 3 of this series.

Rewilding the Herd – Getting There