Here is an excerpt from an astounding book, Eclipse of The Heart, by fellow horse listener, Adam Adrian Crown. My review of the book follows afterwards: 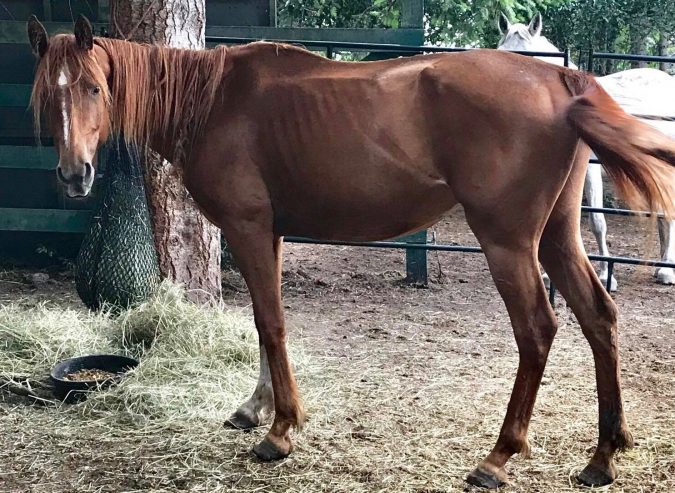 I call her Corazon.

Her actual name, in the record books is Cora’s Own. I don’t know who gave her that name or who Cora was or how this wonderful chestnut mare wound up half-starved, worm-ridden and dead lame on her way to the slaughterhouse. Probably just as well that I don’t know that.

I went to my first and last horse auction with the wife of an acquaintance of mine. Stevie is her name. She’s an equine vet — and would turn out to be my own long-term vet. Among other things, she rescues horses whenever she can. Sometimes former race horses who just weren’t fast enough to earn their keep. Sometimes horses too old, lost, broken down or abandoned. She has a network of people with places that could accommodate some of these animals, but not nearly enough. A hundred thousand horses go to slaughter every year. I didn’t know that then. I wish I didn’t know it now.

She was huddled down against the rail of a holding pen, head hung low, ears slack, ribs sticking out, gaunt hipbones, mane and tail ratty and soiled. One of dozens in similar condition. When I approached the pen, she raised her head, which clearly took some effort, and she looked at me. Her deep brown eyes were large and round and soft, even in her wasted condition. I noticed that she had a heart-shaped blaze on her forehead. Against the rules, I climbed into the pen and went to her. She leaned against me, nuzzled my hand with her soft nose, like a kiss good-bye. Then there was some guy at my shoulder, saying something to me about the auction procedure, or something. I don’t know exactly what I said to him. But I think I made it clear that I was taking this mare home with me and I didn’t really give a fuck about his auction procedures any more than I gave a fuck about whether he himself were to keep on breathing. Something like that. He didn’t get belligerent or call the cops. Good thing for him.

I don’t go to auctions anymore and I bet nobody misses me.

Anyway, I brought her home with me. I figured, if nothing else, I could give her a place to die where there was sunshine and sweet grass.

For a long time, I didn’t think she was going to make it. There were times when I slept in her stall and woke up three or four times during the night to check on her, see if she was still alive. Spartacus Jones looked worried, too. He stayed closed to her, nickering encouragement. She had abscesses no one had bothered to treat and every parasite in the hit parade, aside from being so underweight you could play boogie-woogie on her ribs like a xylophone. Even Dr. Stevie didn’t give her much of a chance, and she’s saved a lot of beat-up ponies in her day.  But Corazon fooled everybody.

Now, I’ll tell you, I was completely green. I didn’t know nothin’ ’bout birthin’ no babies. But I followed Stevie’s instructions to the letter. I treated her abscesses, her rain rot, got her teeth floated so she could chew, de-wormed her, and added every supplement in the known world to her diet, along with plenty of Dr Green – good pasture. Gradually – very gradually – she started to come around, started getting stronger. On the day when she staggered out on her own to graze on a little grass – just a little at first – I felt like I’d just stepped down on the surface of the moon. I thought I knew something about being tough, about never giving up or giving in, about going down swinging. But she taught me I didn’t know shit about it.

So I call her Corazon. I doubt the people who named her appreciated the pun in Spanish. As I got to know her, I came to realize we shared the same heart. Pride, defiance, whatever you want to call it. She’s not my horse; she’s my sister.

We have something. A connection I can’t explain. Some people describe communication as a “V” shape. The bottom of the V, the narrowest part at the crotch, represents the softest, quietest, most subtle communication. The top, the widest spread, represents the hardest, loudest, most overt. A good horseman, they say, communicates at the bottom of the V. Corazon and I, we operate below the V.

I know a lot of horses who come to greet me when I come over to their paddock. Among themselves, I’m sure they refer to me as Mr. Apple and Carrots. But when I go to see Corazon, she’s already there, waiting for me. We go for long rides. Almost always bareback. Don’t need a bridle. Often I either loop a lead rope around her neck, or just hold her mane, which is now thick and luxurious. I don’t steer her with reins or lead rope. I don’t even steer her with leg pressure. I don’t steer her at all. She reads my mind. I only think a thought and she responds, unerringly.  And sometimes, I let her drive. We go where she wants to go and how she wants to get there and somehow it always seems to be where I want to go, too. That may sound spooky or crazy. But it’s not such an impressive trick, really.

It seems quite natural.

THANKS to fellow horse listener, Adam Crown for sending in this beautiful chapter from his book, Eclipse Of The Heart – along with mailing me a copy of the book. Here is my review of his book, for those of you who might want to check it out:

This is a remarkable book. By 25 pages in, I was convinced I was actually reading an autobiography. The level of vulnerable detail and insider knowledge in this book just cannot be imagined… The book ricochets from serious violence, to pornographic encounters, to heart-opening discourse about childhood abuse and rescue horses. The insider info on the judiciary system and what it’s like to be a cop rings about as true as Excalibur’s sword. At which point we simply must assume this IS an autobiography, but probably logged as fiction due to statute of limitations restrictions. Which is a shame. Because if it could be released as an autobiography it could easily follow the same trajectory as The Glass Castle. It is that shocking and that remarkable.

Eclipse Of The Heart also took me on a journey of examining my own feelings/position on vigilantism. For most of the book, I was glad that there was someone like Jack (the protagonist) to even the score and prevent men like the drunk driver who killed a family (because he had lots of dosh and was plugged into the old boys club) from walking away free. Again, the detailed descriptions of how he plans and executes each punishment ring absolutely true and you find yourself thinking, “There’s just no way he could make this shit up.” But by the time I got near the end of the book, I found myself changing my position on vigilantism. Here’s my take-away: I supported Jack’s crusades when the case had already gone through trial and the Judge requested Jack’s assistance. Or when the surviving member of the dead family requested help. But when Jack begins balancing the scales of justice based on his own experiences, interactions and woundings… that’s when things went sour for me. That’s when things circled round to Nietzsche’s warning, “Beware that, when fighting monsters, you yourself do not become a monster… for when you gaze long into the abyss, the abyss gazes also into you.”

Regardless, this book is a tremendous commentary and look inside the justice system and what’s wrong with policing in America. The fight scenes are superb – as only an experienced martial artist could describe them. Jack’s boyhood and upbringing are heart-wrenching and he provides the best, multi-faceted, description of a childhood sexual encounter (he rejects the label of ‘abuse’) I have ever encountered.

This book is not for the puritan, the squeamish, or anyone easily offended. Indeed, there were times I wished I wasn’t reading it and that his stories and images were not entering my mind. It’s a book that stays with you long after you close the pages – and not in a ‘feel good’ way! Although the voice of the protagonist is full of ego-based bravado, that voice is also authentic to the story and what the character has experienced. All in all, it is a powerful, thought-provoking book. Difficult, gripping, riveting… a challenging yet worthwhile read.

p.s. And thanks to Belinda Lyall for the horse rescue pics!