The other pony (Syrup) who is in with my horse Zorra, used to be a bully. My daughter Zara is free leasing him from his owner, Cheri, and every other free lease he’s been on has returned him within 3 weeks. They either can’t handle him, or he wreaks havoc with their other horses. At one place, Syrup (who is a 12.3 hh Curly/Shetland cross) kept 3 large horses from eating OR drinking for 12 hours straight until the people phoned Cheri to come “get him outta here.”

But my take on him is that he is highly intelligent, highly responsive, and does not ‘suffer fools gladly.’ So if he is with someone who can hear him and respond in relationship (like Cheri or Zara) – he is fabulous. Knowing his history with other horses, I spent quite a bit of time before Zorra arrived talking with him about the difference between using your power to be a bully, and being a strong, gentle leader. And I told him that he had to step up to being the latter!

Of course, my personal work is to model strong, gentle leadership to him – which is no small challenge for someone like me who defaults to anger when challenged.

When I put the first slow feeder in one of the shelters (I could only fit one feeder in my truck at a time), he didn’t want to share with Zorra, and when she attempted to come into the shelter, he would immediately drive her back out. Since the shelter is only 8 feet wide, there is not a lot of room for 2 horses, and they both need to be settled and respectful to eat in there together.

So I centered and grounded myself first, set an energetic bubble of protection around myself and then went into the shelter. I started by talking to Syrup about sharing and then realized that a lot of his bullying was due to scarcity. He was afraid of not getting enough, and had learned that the way to avoid being without was to take the upper hand immediately. So I did some EFT tapping for him on that; releasing those past experiences and opening up the potential for a new way of being in this space, in my herd, where I am holding intention for a very different reality: Look at this slow feeder, for example, this is here so that you will NEVER be without hay. There is no scarcity of food in this place. And so on.

As we tapped through his past experiences and points of resistance, Zorra entered the shelter again. I projected an energetic barrier between the two of them (extending out from me) as I held my space sandwiched between them. Let me just say that this is not a recommended position to be in! And if I was not working in this predominantly energetic space, I would not have stood in such a vulnerable position.

It may sound bizarre, but I then proceeded to teach him how to share – just like I taught each of my 3 kids. I pointed out to him the half of the 4′ slow feeder that was his and requested that he not push into Zorra’s half. When his nose began traveling towards her half, I reminded him by waving my hand gently in a slicing motion, “the half-way boundary is here, remember?” At the same time I praised him for being a good, kind leader, for keeping Zorra safe and for learning how to share.

As he learned what I was asking and experienced that sharing a 4 foot wide slow feeder was not so bad, I began moving away from their heads. First to their shoulders – where I could still lean in and wave if needed – then gradually back to their bellies, then out of the shelter entirely. At that point, I stood outside and continued to talk to them about my vision for them sharing and becoming true friends, and praising Syrup for sharing so well.

Then of course, Syrup would revert to his customary behaviour and Zorra would back hastily out of the shelter. Then I would go back in and repeat the whole process. This happened about 3 times and then I felt we were done for the day, and that Syrup had made fantastic progress. 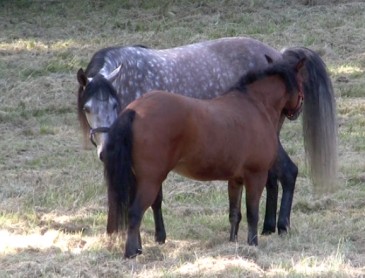 I was prepared to come back and repeat the process over the next week or so, but amazingly, that’s all it took. I think this process helped Syrup to view Zorra differently from most horses he’s shared space with. And I think nature also helped me out by Zorra coming into heat soon after she arrived, and the two of them beginning a love affair!

I want to point out though, that EFT and communication/training do not change a horse’s personality. So of course, Syrup pushes Zorra around from time to time, and he will occasionally drive her out of the shelter. But the majority of the time, he is content to share. Which is a huge shift and improvement for him.

Even now, after I put the second slow feeder into the second shelter, I will often arrive to see them eating together in one shelter, rather than separately.

After about 2 months of sharing well and Syrup exhibiting many signs of being a strong, gentle leader, I arrived at the barn one cold, rainy day to find Syrup covered in mud and bits of crusher dust and not allowing Zorra into the shelters to eat.

So I began the barn chores, while allowing myself to sink into nature, connect to the trees, and allow my own nervous system to down-regulate before attempting to connect into their space.

Syrup kept pushing into my space of the hay/feed/tack room as I was in there, and when I asked him to move back, he did so fairly easily. But when I carried a load of hay out to fill the first slow feeder, he actually went all the way inside the feed room – something he has never done before. He backed out at my request and then pushed in a few times, so I had to wave a plastic bag at him to get him to move back sufficiently. When I took the next load of hay, I kicked the door closed behind me. But he nudged it open again with his nose and again went inside the feed room. He didn’t even knock anything over in there, but he fully had my attention now.

I asked him to come into one of the shelters with me, so we could connect and he could tell me what was going on with him. He did not even want to eat the hay, but just stood there with his head lowered, as I sat on the edge of the feeder. I connected to one of my favorite elder trees and settled into some deep, grounding breaths, set a protective bubble around myself, and then opened the front of my chest to receive.

What I felt was that Syrup was really grumpy and depressed. He was totally bummed out about the non-stop rainy weather and was really bored. He flashed me scenes of his larger herd and 20 acres at Cheri’s place and I felt his feeling of being confined to only 5 acres and one other horse. I understood how herd dynamics create a lot of entertainment, distraction and engagement – which he was missing.

So I began tapping (EFT) on all these aspects for him. And then I opened up his chest to connect to the grandfather tree and feel the tree’s peace and surrender to the elements – whether rain or shine. We also talked about my daughter Zara and her busy schedule with school and gymnastics and why she wasn’t coming out to see him as often as she had in the summer, and that he missed her.

I think choice is a huge part of a loving relationship (wherever choice can be given) and so I also let him know that he wasn’t stuck here. If he was not enjoying it here and wanted to go back to Cheri’s, he just had to tell me and I would find another horse to come stay with Zorra, and then he could spend the winter on the large pasture with his old herd and his Mum. We had a quick cuddle (Zara is the only one he likes to cuddle deeply with) and then he moved off to eat some hay. I got the sense he wanted to think about things.

Since the following day was a Saturday, Zara was able to come out with me to see Syrup. But I didn’t tell her anything of what transpired the previous day, or what I had said to Syrup. All I said to Zara was, “Syrup’s been depressed lately, why don’t you see if you can figure out what’s up with him?” We went our separate ways at the barn and by the end of two hours, Zara came over to me and said, “Syrup wants to go back to Cheri’s for the winter. He’s really bored here and he wants to see his Mum. I can’t give him what he needs. And I need to focus on the Gymnaestrada in Finland.”

So I contacted Cheri and she said, “Just let me know when you want me to come get him.” It took another 10 days for me to arrange herd mates for Zorra and trailer the 2 new horses down to my barn. But during that time, Syrup was fairly content and did not display any bullying behaviour. I think he was able to relax and stop ‘signalling’ us that something was wrong, because we had listened to him, addressed his needs, and taken action. Of course, I had informed him that he would be going home as soon as Cheri confirmed it – and had asked him to be patient while I arranged for new herd mates for Zorra.