VIDEO: Pregnant Mare Figures Out How To Rock Her Own Pelvis! 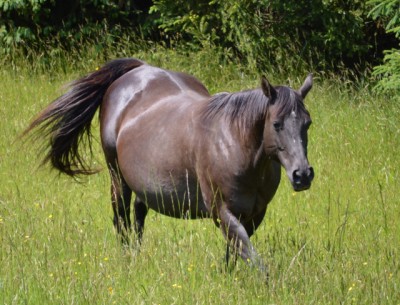 We had our equine chiropractor out to work on our horses and she noted that the pregnant mare, Amalia, was holding her belly up tight – like she was afraid to let things go and let them stretch. So she worked on that using a combination of chiropractic and Reiki. She also worked on her pelvis; which was also tucked in or clenched more tightly than it should be, and was able to get that a bit looser too.

A couple of days later, a friend who is a midwife came out. And she also said that her pelvis looked like it needed loosening. She suggested we try to teach her, or give her an idea of what pelvic rocking is. As that’s what us humans use to rock our pelvis looser, get some space in the joints, and limber up the area in preparation for birth.

Well, having birthed 3 munchkins, I certainly know what that looks/feels like! So as Kesia groomed Molly and talked to her, I stood in front of her and showed her what pelvic rocking looked like, as I swung/rocked my hips from side to side. In my mind, I was transmitting to her, “See what I’m doing, this is what you need to do. Figure out how to do this with your body, in your pelvis. This is what baby needs and is what will make birthing so much easier for you.”

At that point, I saw Amalia cock her hind leg and a thought flashed into my mind (this is how horses/animals communicate – through ‘feelings’ or mind telepathy) so I said to Kesia, “Pick up her hind leg – no, not at the hoof, at the thigh.” As soon as Kesia did, Amalia started moving that leg/hip in a circular movement. Once she knew Kesia understood what she wanted, she relaxed her weight into Kesia’s hands and then Kesia moved the hip through the same circular/lifting motion Amalia had just showed her. Amalia put that leg down when she’d had enough and cocked the other hind leg. So Kesia moved to that side and repeated the same exercise. We were amazed!! It was a wonderful, hip rotation exercise that lifted the leg up and stretched it out from the joint – creating space and movement. Wish we’d gotten that on video!

Two days later, Kesia was grooming Amalia and this is what spontaneously occurred during her belly scratch session – luckily she had her phone in her pocket, so we are able to show this to you:

Life is SO much more magical when you listen to your horse!

VIDEO: Pregnant Mare Figures Out How To Rock Her Own Pelvis!

2 thoughts on “VIDEO: Pregnant Mare Figures Out How To Rock Her Own Pelvis!”