How To Choose The Best Hay For Your Horse 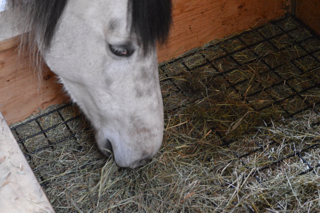 First of all, regardless of which hay you feed, if you place it in a slow feeder (or hay net) and allow your horse 24/7 access to hay – you will have a much healthier, happier horse. If you put the right kind of hay in that slow feeder, even obese or laminitic horses will thrive – and yes, I’ve tested this!

So, once you have your slow feeder in place, you need to fill it with the right kind of hay: Unless your horse is doing a lot of exercise, then you’ll want to feed a low starch, low sugar hay. You want the Non-Structural Carbs (NSC) – which is the TOTAL of all sugars and starches – to be lower than 12%. The only way to determine this is by getting your hay tested. Many good hay farmers will get their hay tested at an independent lab and be able to provide you with a report. But if you want to double-check, or do it yourself, here’s how:

Some people think that whether the hay is 1st cut or 2nd cut influences sugar levels – but in fact it is more determined by the type of plant, whether it has bloomed/seeded or not, and the time of day the hay is cut. That’s why you (or your hay company) needs to have the hay analyzed to determine the actual NSC levels.

Once you have your test results in hand, here’s a simple outline you can download of what your test results mean. If you want the in-depth analysis, then here’s a 20 minute video that covers every aspect in depth. The most important parts of your hay analysis are:

Dry Matter (DM)– This tells you how much of the sample is left after water is removed. It is the moisture or dry matter content of the sample. Hay will generally be about 89 percent dry matter or greater.

Digestible energy (DE) – This is a measure of the digestible energy in the hay. For a light-working horse, DE should be 20.5 Mcal/day. Hay may have .76 to .94 Mcal/pounds or higher of DE.

Total Digestible Nutrients (TDN) – This is a measure of the total digestible nutrients in the hay or its energy value. TDN may be used in place of DE or offered in addition to DE. It may range from 40 to 55 percent.

Crude Protein (CP)– This is a measure of the protein concentration of the hay and can range from 6 percent to 8 percent in native grass hays to about 15 percent or higher in high quality legume hays.

Neutral Detergent Fiber (NDF) – This is a measure of the plant’s cell wall content, shown as a percent. The higher this is, the less hay the horse will eat.

Acid Detergent Fiber (ADF) – This is a measure of the fiber concentration of the hay, shown as a percent. As ADF increases, digestibility and nutrient availability decreases.

Non-Structural Carbohydrates (NSC) – This is a measure of the non-structural carbohydrates in the feed. If your horse has Cushing’s disease or is prone to colic or laminitis, you want to select hay with a lower NSC value. Timothy and alfalfa hay may have a 15 percent or 20 percent NSC value, respectively. If you want this analysis done, you should check to see if the lab offers it, as it is not a common analysis at this time.

Starch and Sugar – This is a measure of sugars and starches in the feed. You should feed no more than 15 percent of total daily calories from starch and sugar to horses with EPSM (equine polysaccharide storage myopathy) and PSSM (polysaccharide storage myopathy). EPSM is a muscle disease found in over 100 draft breeds that may cause severe weakness and muscle wasting in horses of all ages, poor performance, abnormal hind limb gaits and shivers, in which the muscles keep twitching. PSSM is a muscle disease found in horses with Quarter Horse in their breeding, such as American Quarter Horses, Paints and Appaloosas. Symptoms include reluctance to move, muscle stiffness, sweating, shifting lameness and tremors in the flank area.

NOTE: You’ll see that these authors above recommend a starch and sugar content of 15% or less – but for “easy keepers” or those prone to laminitis or founder, many vets recommend 12% NSC or less. Also, if you are giving your horse grass turnout, then the lowest sugar levels in grass are at night, after the sun has set. The highest levels are in the morning, before the dew burns off.

Environmental conditions at harvest time:
1. Grasses stressed from drought conditions or freezing temperatures will contain higher percentages of NSC/NFC.
2. Stressed-out warm season grasses – such as crabgrass or coastal Bermuda grass – tend to be lower in NSC/NFC.
3. Stressed-out cool season grasses – such as fescue, orchard grass, and timothy, tend to be higher in NSC/NFC.

Maturity of plant:
1. Young plants are higher in sugar.
2. Mid-bloom and mature grass is lower in sugar.
3. Very mature plants tend to contain large amounts of indigestible fiber and can be unpalatable. The timing of harvest and curing conditions, grasses harvested in the morning, following evenings when temperatures are 40°F or above will be lower in NSC/NFC.
4. The longer hay is dried in the field, the lower the NSC/NFC. Western hays tend to be harvested later in the day and baled more quickly than Eastern hays, so they can be higher in NSC/NFC.
5. Hay that has been lightly rained on will be lower in NSC/NFC; however, it must be completely dry when baled or it will become moldy or dusty.

If you’re having issues with your horse’s health, or you’ve noticed that although your horse is being fed the required amount of hay for their body weight, but they are still “psychologically starving,” then this is the best book I’ve read on this topic by Dr. Juliet M Getty, PhD. She also has separate books for specific conditions like Laminitis, or the Aging Horse.

How To Choose The Best Hay For Your Horse