I am an absolute rookie when it comes to pasture and grass management. For years I couldn’t really conceive of it; I guess I took grass for granted. Being the ongoing steward of a small piece of the earth has changed that, and over the last three years since moving to our land, I’ve started to understand the concepts of rotational grazing and resting parts of the pasture. In the time that I’ve come here, I’ve become fascinated with regenerative agriculture concepts – that is to say, the idea that we can work with the land for both its optimum health and ours, and that of our domestic and wild non-human friends.

Regenerative agriculture (RA) is an entire movement – complete with theory, dogma, prophets, and heated internet arguments – that, ultimately, aims to increase biodiversity, decrease heavy land management (like tilling), and sequester carbon rapidly through health root growth and retention. There are a lot more talking points on RA, and seemingly endless approaches and goals therein, and I am really just beginning to scratch the surface in my own research and the experiments we do on the farm. It is generally spoken about in terms of animal or mixed agriculture, but there is no reason why those of us keeping horses shouldn’t use the same principles. Suffice to say, I think you’ll be seeing more content from both Jini and I (and hopefully some guests!) in the near and far future as we dive into what it means to holistically manage our equine herds as part of a thriving ecosystem. 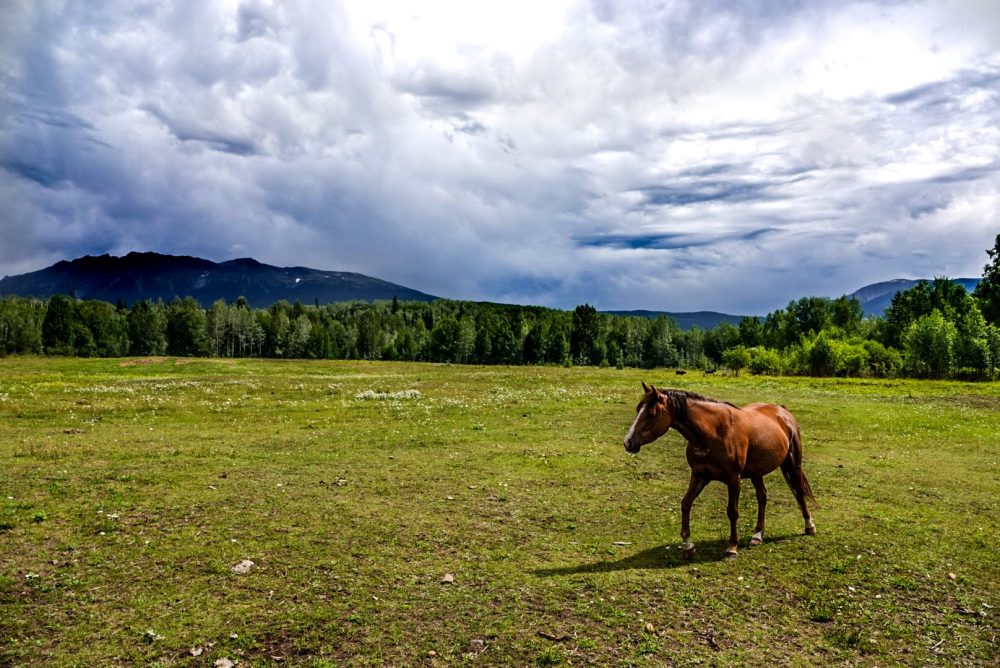 Last winter, with the addition of a small herd of cows, our one round-bale horse feeder was no longer sufficient. With the two (actually four, with pigs and goats) species constantly at odds around resources, I knew the horses might well just guard the hay and not allow the cows – several of them pregnant – to eat enough. Our hay guy suggested rolling the bales out across the pasture to give more access to each bale, and then promptly set about doing this for us, driving single bales out twice a week and rolling them out himself before I could pull on my boots and stumble through the snow to help him. We don’t have our own tractor and we don’t have storage for all the round bales we need, so we usually default to what we’re able to do, or what the hay man is willing to help us with – which is quite a bit, but we are acutely aware of the limits of human capabilities and willingness, even if he isn’t!

At first we were shocked at the waste the animals left behind, pooping directly in the hay and leaving apparently good food to come beg at the fence until we relented and ordered another bale. When you have as many moving parts as we do, most systems end up being “good enough” and left that way even when they aren’t ideal. There’s not a lot of time to go back over everything and tweak it all to perfection; that seems to happen gradually, a little here and a little there, and everything always in process. So we rolled our eyes at the waste and mess and kept doing the same thing because we didn’t have a better option.

Come spring, there was a heavy mulch of poo and hay wherever the bales had been rolled out – most specifically, on the slight hill where rolling had been easiest for our hay man. Today in late summer, that hillside is still the greenest and most lush area in our pasture.

This year has been tough for growing. We went into winter after a long, hot summer that left us in severe drought, which we didn’t really acknowledge when everything was frozen over and snow was on the ground. In fact, we did not get the “usual” amount of snow, and the ground itself had very little moisture retained within it. So when the thaw came, there was hardly anything to kick start the grass growth. As a result, the short-lived grass, targeted by the animals, gave way quickly to weeds like hawkweed, daisy and buttercup, leaving very little food for our grazers and foragers. But all on that hillside, the grass stayed green and lush. A little research illuminated why:

1. Mulch. Mulch is a wonderful retainer of moisture. The wasted hay stalks had covered the damaged soil and kept it from drying out early on.

2. Seed. Hay is full of grass seed. All the uneaten seeds had fallen through the stalks and planted themselves in the moist environment.

3. Fertilizer. Horses and cows poo where they eat! So by unwittingly concentrating their eating area to this hillside, we had also concentrated their manure distribution. We get a hard freeze in the winter for at least a week at a time, which I understand kills the worm load in the manure – we can leave it in the field and not compost it first.

4. Organic material. While grazing removes organic material, hay waste (and poo) actually add it. This area will continue to break down and regenerate as the dead grass returns to the earth.

This hill had been mulched, seeded and fertilized without us lifting a finger. 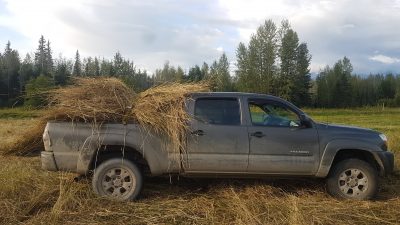 So this year, in the spirit of listening to the land as well as the horses, we are mimicking this accidental experiment. When a neighbour let us know he had a corner of a field of hay down that he couldn’t bale due to the lumpy ground, we showed up to haul away truck load after truck load of loose canary grass. We have been targeting the most weedy and bare areas, covering them with a cap of hay. 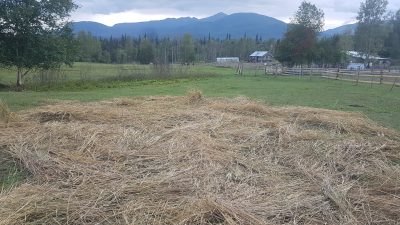 The hay is quite mature and not particularly tasty, so the horses are wasting lots of it (great!). But it’s enough to attract them to nibble, and therefore poo as well. We won’t know til next year if this treatment does anything noticeable, but we now know there is nothing wrong with adding clean organic material to our fields.

This winter, I’ll show you my plan for utilizing this mulch/poo discovery a little more methodically. Til then, I’m crossing my fingers we have another month of green grass left!

I’d love to hear from you in the comments below how (or if) you’re managing pasture. What’s working? What isn’t? And if you have any questions, let’s hear them too!

How to Use Goats for Pasture Management

How to Get Your Pastures to Grow Faster & Reduce Sugar!

Get Rid of Pervasive Weeds by Strengthening Pasture Grasses