It was clear from the beginning that there would be no nonsense endured throughout this pregnancy – no unnecessary precautionary procedures, no ultrasounds, no palpating, no internal exams, nothing. When Amalia puts her foot down, there’s no arguing.

In fact, we didn’t even know if she was (for sure) knocked up till she started to swell in earnest, though the frequency and urgency with which copulation occurred in the months prior indicated that there was some fighting chance that sperm and ovum had united.

When Amalia, Spero and I moved up to The Big Ranch, I was told there was a wild-not-so-wild stallion on the prowl, and was aware of the likelihood that he’d make a mission out of impregnating my mare. Jack, a calculating feral horse who had eyed up the new ranchers the first winter and chosen a sedentary life with their geldings and regular hay feedings over the costs of freedom, remained wild to the touch and did not equate domesticity with tameness. He had beautiful conformation, a whole lotta smarts, and his moves put dressage horses to shame. 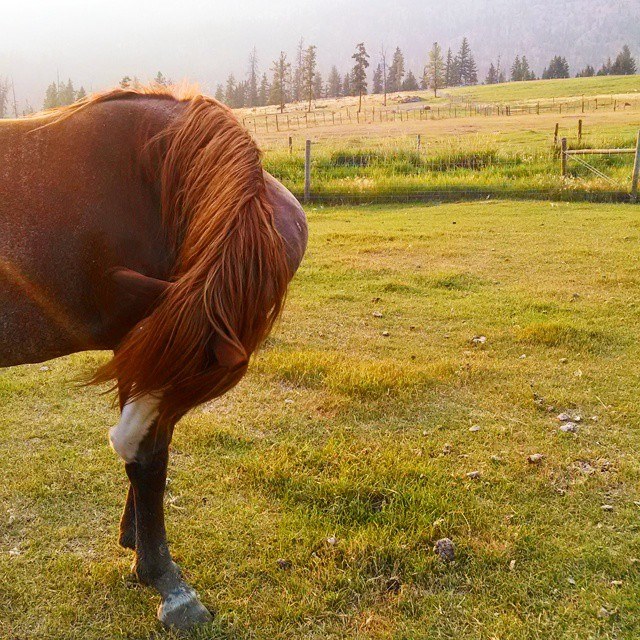 It took all of one day for him to break through the gates and lead a grueling conquest to drive Amalia away from her city-boy companions. He did breed her, frantic and forceful at first (it was her first time and likely his and I spent the first few days cursing my lack of foresight and feeling like the worst horse-mama in the world), then as the months went on, they seemed to find their rhythm. They were inseparable for five months, roaming the bunch-grass hillsides and disappearing over the void toward the river. They always came home for snacks, though. Amalia was my daughter tossing her hair over her shoulder on her hasty way out the door; Jack was the well-muscled dude in a leather jacket who hovered at the end of the walk waiting for her (maybe leaning on a Harley) and never came over for dinner. I watched him flow like water down rocky banks to show Amalia where to drink from the spring. They both felt complete. For a brief time, they were each the other’s world entire. 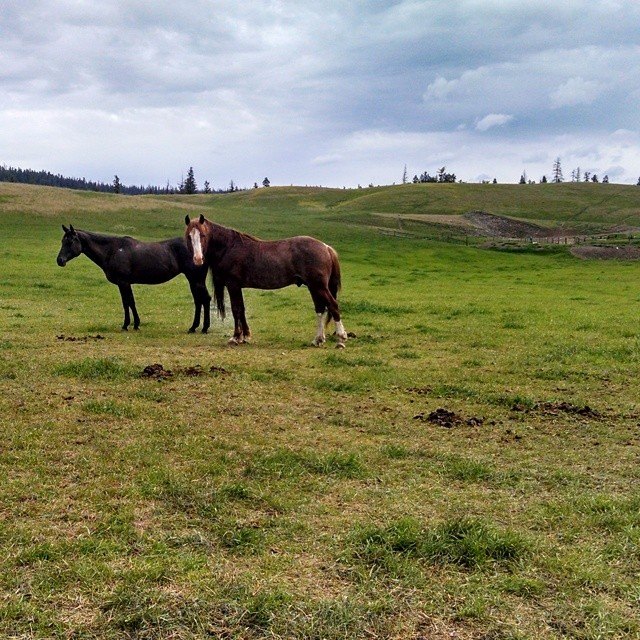 Fast forward six months and we’re back in the big smoke. Things change, ideas shift, outcomes do or do not occur as predicted. The natural herd and love affair I’d dreamed of allowing to flourish, the little family I’d so hoped to see in those pinetree hills was not going to remain a reality.  Back home for the winter, we weren’t certain she’d “taken”. She was lean from range life and had her poker-face on – not a single one of our intuitive humans got a clear positive from her. She’d been through a lot. We focused on nourishing her body and healing whatever she brought to us. 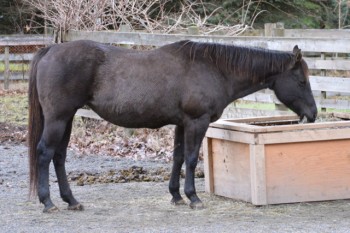 But eventually, as her body bloomed and her heart opened, pregnancy became a point of pride. Suddenly, everything was about growing that baby. I don’t think she stopped eating for more than ten minutes for at least three months. 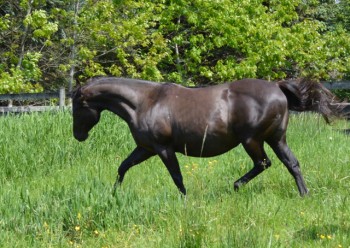 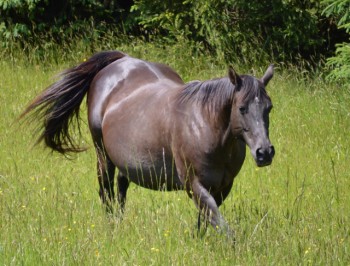 …and as the baby got bigger and things got more cramped inside of her, somehow the right people always knew to visit. Women of all sorts were drawn to Tiny Ranch to help rub that baby belly and talk to Amalia about what being a mom was like. What to expect from pregnancy, that what she was going through was totally normal. Our chiropractor adjusted her pelvis and a real midwife (for humans) checked up on baby’s heartbeat. When several people all individually expressed concern that baby was breach, we used gentle, non-invasive massage, stretches,  exercises, and Amalia-initiated rocking techniques to help encourage the baby into position.

I sang and talked to that baby as I scratched and rubbed that belly, and joked that the foal would be born addicted to human contact. When I sat on one side, the whole belly would visibly shift over into my lap, something nobody could confirm ever seeing before.

We waited, and life seemed to pause. It was almost unbearable. Never mind the cougar reported to have taken down a horse and a cow in the immediate area, the coyotes circling in the trees, the worry that she was so huge it was possible she was carrying twins to term, and whatever other human anxieties I could drum up. 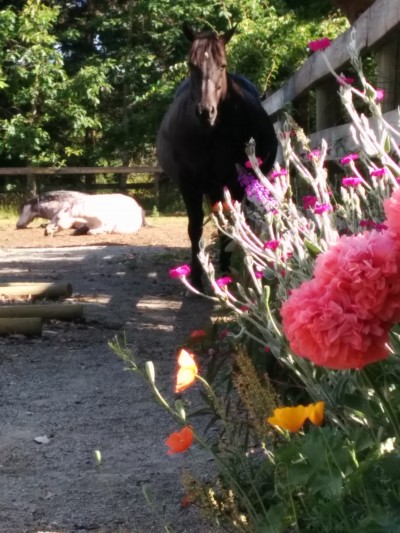 And then, on July 5th, the baby came. Just like that.

From the signs they left, the birth was short and violent. Amalia was exhausted and hungry but shone with victory.  We tidied her chosen paddock corner, brought her good hay and moved the water closer, while baby stood on uncertain legs and suckled noisily. How could I have ever imagined such extraordinary intricacy to appear over night? 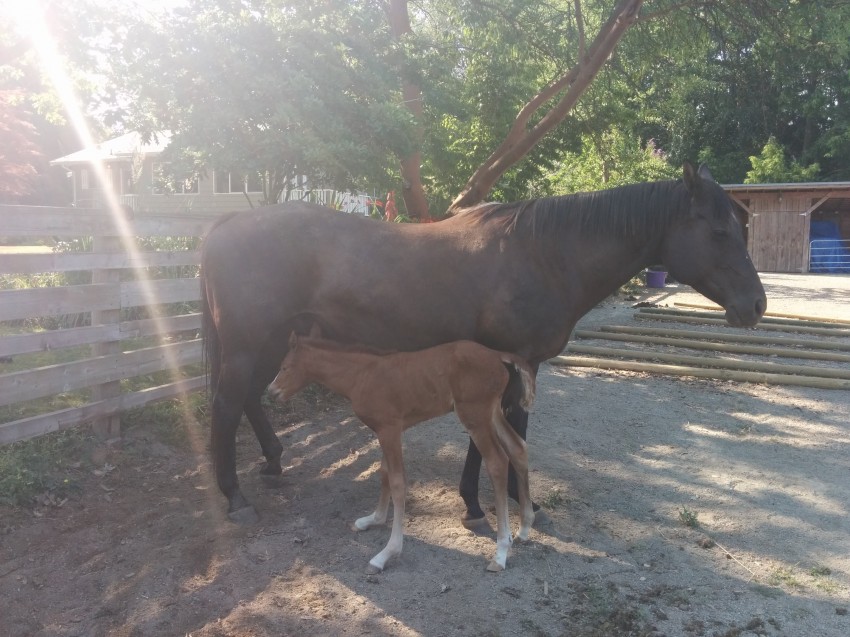 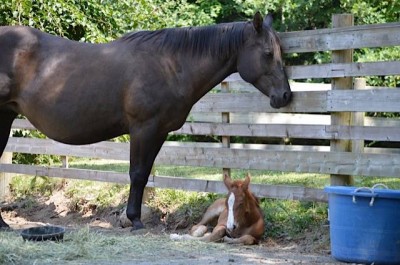 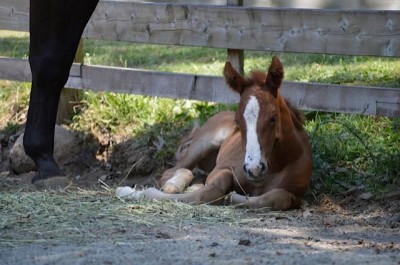 Firefly, named for the fires that spread smoke over the valley on the morning she was born, for the light she ignited in my heart, for the deliciously sweet glow she brings to everyone who meets her. She came to meet me on her first day, initiated a massage train with me and her mama on the second day, taught me how to spoon a baby horse on the third day, and has been thoroughly delighting me every day since.

Here are some highlights from her first few weeks: 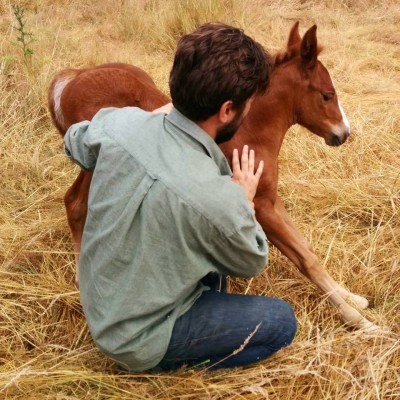 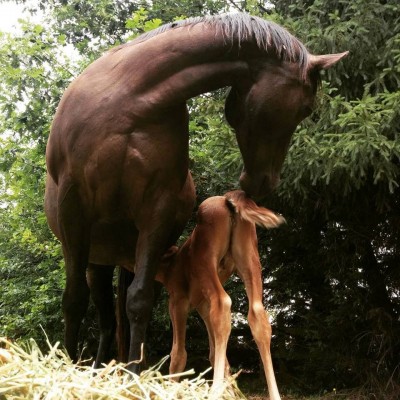 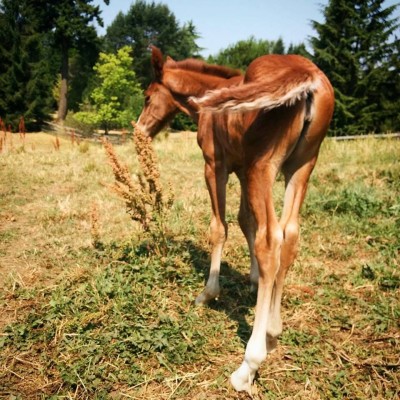 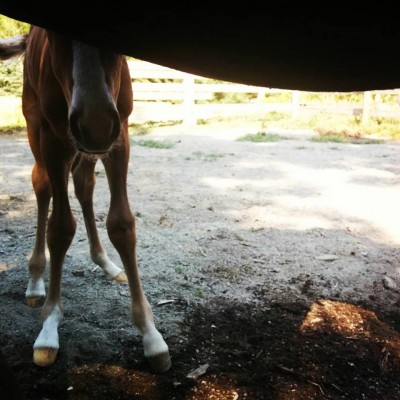 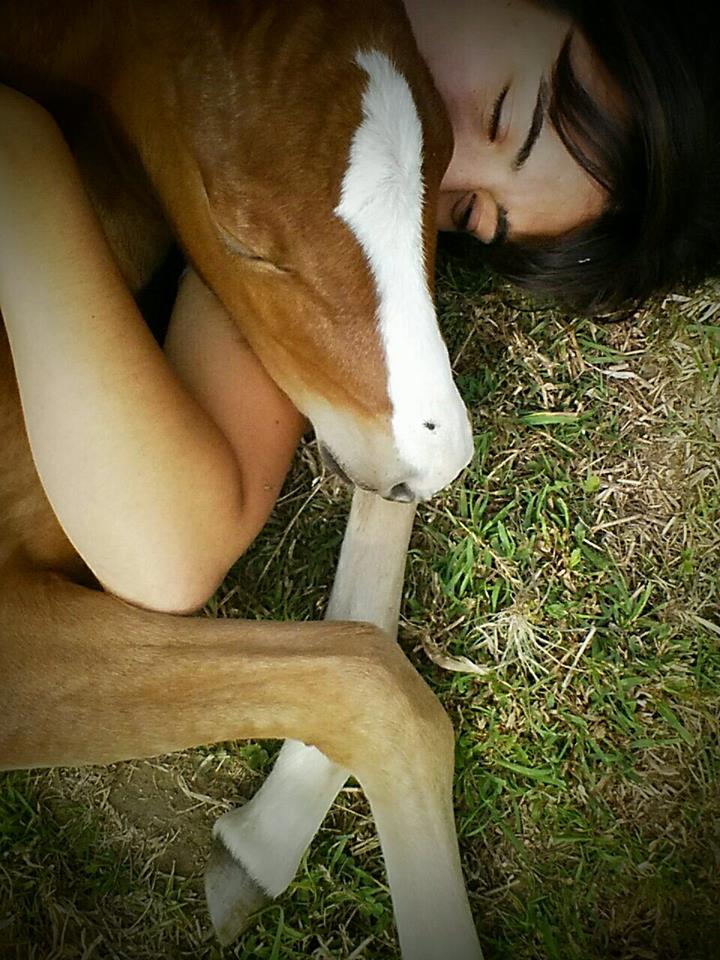 It’s beyond-words-fantastic to be involved in this little one’s first experiences of life. She comes, walks with me, and is learning to pick up her feet, all of which is behaviour she’s simply offered and I’ve begun to attach cues to – no treats, since she’s happy enough just to be together and I’d like to keep it that way. I’ve watched her shadow-box with trees, lead her mom and uncle on wild gallops around the pasture, and learn how to tone down her horse-play so humans won’t be intimidated. She hasn’t known force, restraint, punishment, invasion, or deprivation, simply because there has never been a need for any of it. And she is robust and trusting and full of love. Best of all are the heart-hugs she gives, oh, and her excellent hair styling abilities. 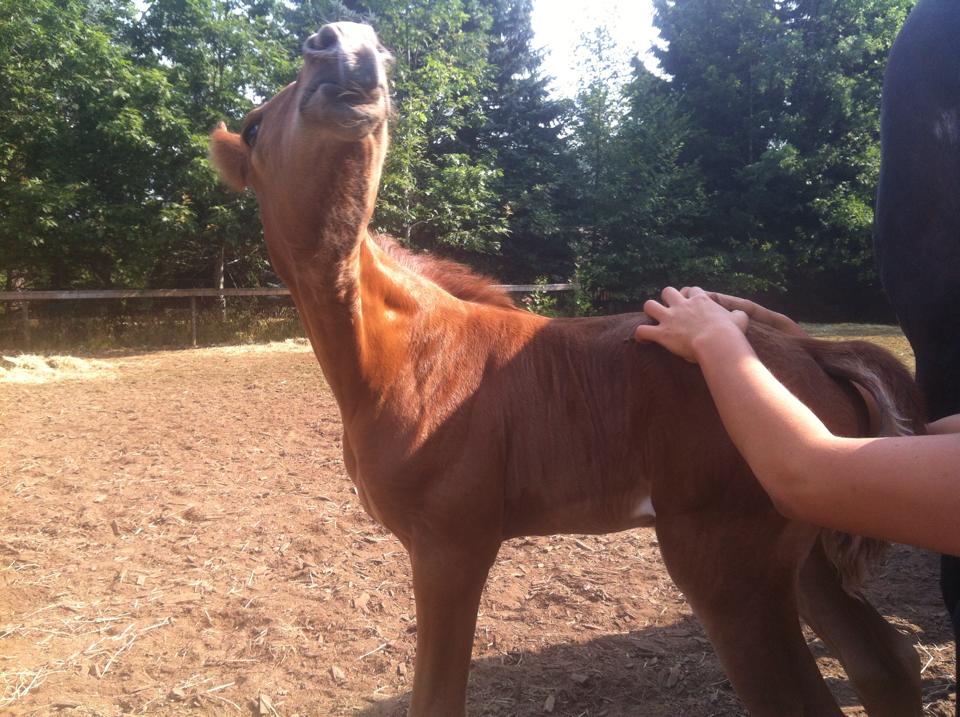 4 thoughts on “Flight of the Firefly”