I first began feeding soaked hay pellets when I received a senior horse for rehab who suffered from chronic diarrhea. The equine dentist told me that his teeth were completely worn out and incapable of chewing hay. I told him about the diarrhea, and he said, “If large unchewed pieces of hay get all the way to the colon, they can irritate it and cause the diarrhea.” I was thrilled. Perhaps all I had to do was remove the hay from his diet, find something else to feed, and maybe the diarrhea would disappear? 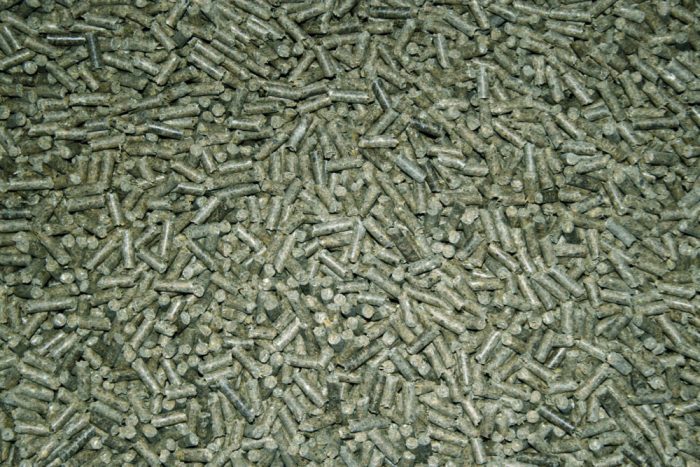 Being a traditional western vet, in addition to a cutting edge equine dentist, he recommended going to a senior horse complete feed instead of hay. But I had already been through all the grain issues with another horse, and all the damage it did to his gut. There was no way I was going to feed grain to this horse. Thankfully, I had a holistic vet to consult with, and she recommended feeding hay pellets or cubes, weighed and fed in the same amount you would weigh hay.

Within two weeks of his new diet, the diarrhea was gone, never to return.

How to soak & feed pellets

When feeding hay pellets, I do a ratio of 2:1, cold water to pellets. This works for alfalfa, timothy, or orchard grass pellets. Alfalfa pellets tend to be a bit drier (depending on the weather when and where they were made) so I soak them for 5 hours to get them to completely break down.

I have had two choking incidences with two different senior horses on hay pellets. One time was completely dry pellets and required veterinary intervention. The other time was on pellets soaked for 20 minutes. That horse worked it out himself over half an hour, but after that I just decided to soak until they are completely broken down, and I haven’t had a choking incident since then.

When soaking in the summer, I put them in a cool place out of the sun and then feed after 5 hours, but I always check the smell to make sure it hasn’t started to ferment. On a hot summer day, I have had them ferment after 8 hours, so I don’t feed that batch if that happens.

In the winter, when it’s cold, I can soak the pellets overnight outside, or in an unheated garage. The pellets can still be okay after 12 hours, if it’s cold enough. However, my preference, when possible, whether hot or cold weather, is to feed them after 5 hours of soaking.

The only downside is that in very cold weather, like 10-15 degrees Farenheit, the pellets will refreeze after about 20-30 minutes of being in a feed bucket. So for my horse that was on the hay pellet diet, he couldn’t finish before they started to freeze again. So I fed in smaller amounts, keeping the pellets in an insulated bucket and only handing out what he could eat in 20 minutes. Thankfully it’s only that cold 1-2 weeks per year, where I live.

On a rare occasion, if I don’t have 5 hours, I can get away with soaking for 3 hours, however, the pellets are partially broken down, but not all the way, and the alfalfa pellets are less broken down than the grass hay pellets, so I stay and watch the horses eat. I haven’t had a problem so far, but then I rarely do that.

If you have any further questions, just leave them in the Comments section below 🙂

Mary Walby began rehabbing senior horses by accident over 10 years ago at the same time she started training in the martial art of Aikido to learn how to fall off a horse. Little did she realize that the essence of Aikido would permeate every aspect of her life and make it better, from performing and teaching piano, to rehabbing senior horses. She recently founded God’s Window Senior Horse Rehab and Sanctuary, a non-profit organization committed to promoting the health and welfare of all senior horses from a holistic perspective.

46 thoughts on “How To Soak & Feed Alfalfa, Timothy or Grass Pellets”