No Pressure, No Fear: Teaching Your Young Foal to Lead – Part 3 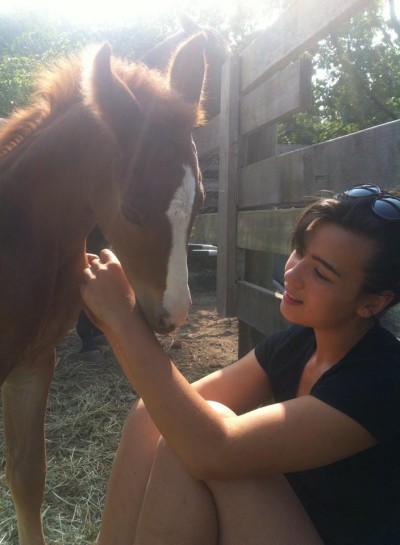 At this point in the story, Firefly has learned to lead at liberty, and has been incrementally introduced to the halter and lead in short, spontaneous “training” games reinforced positively with praise and grooming. She can lead with no pressure on the line, but has only gone a few steps with me around her mother.

Despite my ideals of staying off my horses’ faces, I am indisputably attached to my horse by her head when holding a line attached to her halter. It stands to reason that she should learn, with as little discomfort as possible, that there are limitations to her freedom and movement when we work like this.

So next up, I wanted to teach Fly a little pressure and release – that favoured tool among horsemanship-types. When over-used, I find this tactic at best annoying for the horse, and at worst deeply abusive, but the fundamentals of the concept are, in my eyes, sound.

For the technical brains out there, it is known as R- or negative reward: applying a negative stimulis until the horse does what is asked of her, whereupon the stimulus is removed, thereby rewarding the horse with the cessation of discomfort and a return to a neutral state (poking a horse in the side, waving a whip, twirling a rope, etc until the horse moves away as desired). Many trainers use this method exclusively, while others (champions of R+) vilify it. I see it as an unavoidable consequence of existence and an essential element of learning – that can, unfortunately, be too easily exploited for human agendas. I am nevertheless very grateful to have R- in my toolbox.

I led Fly until she stopped of her own accord, unsure about her next step. I moved forward and picked up the rope with my spare hand so that there was the smallest amount of tension on the line, watching her reaction – she balked a little but did not pull back. At no point in this exercise was I dead-set on maintaining this pressure, and had she become fearful or confused by the tension, I would have removed it immediately. As she appeared only to be thinking about this new feeling, I held the rope with its minimal tension, and called and beckoned to her as I have at liberty. When she chose to move toward me, she discovered that the discomfort behind her ears could be relieved by moving toward the source of tension. She also reinforced that being near me was preferential to being at the far end of the leadline. As we worked, she sometimes walked past me and realized the line ended, and we repeated the process. We practiced this a couple more times as the situations arose naturally, and then called it a day, by which I mean we had an armpit-scratching party and a whole lotta high-pitched praise before she wandered off to find her mom.

To be honest, I personally would prefer that she only follow me because she wants to. But the reality of using equipment like the halter is that it poses a danger for the horse if she doesn’t know what it is or how it works, or how it limits her. Over time, building in the “move away from pressure” response for the halter will be creating a safety mechanism. If she ever gets stuck on something, or if she is scared when tied or otherwise encounters that kind of pressure, she will know the quickest way to stop the pulling is to, well, stop pulling, or move towards the source of tension.

This all seems pretty obvious, but it helped me to break it down like this to understand why I was choosing this learning method. I also discovered that it doesn’t equate to stress, especially if the horse has already learned the skill before the “negative stimulus” is introduced. If anyone has come up with other ways to teach this concept, I would love to hear about it in the comments! 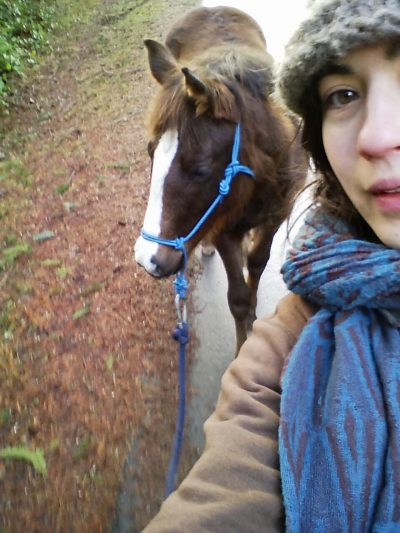 After that, we just started going for walks in the pasture. I have no idea how another foal would react, but from that point forward, Fly seemed to just understand what the deal was. There was never any issue, stress, fear, or shut-down. We went on longer and longer walks further away from her mother as both horses’ comfort dictated, or else the Big Ones would come along of their own accord and we’d traipse all over the property. We are blessed with a wooded area full of trails, which is full of logs to climb over, slopes to negotiate, and low branches to avoid – but having already mastered the trails at a flat gallop on her own, Fly wasn’t worried about any of that.

Eventually, I began taking her out of the pasture but staying near the fence, so as not to worry mare or foal (or gelding for that matter, who actually is more attached than anyone). And we’ve been working on longer and longer walks away from home, or along the pasture fence on the road. She’s dealt with dogs, cars and loud trucks, losing sight of her horse adults, and other minor indignities with a steadiness I am constantly impressed by.

Our adventures continue as Fly gets bolder away from the herd and initiates longer walks. She meets me at the gate and stuffs her face in her halter when she wants to come out; she ignores me or moves away when she’d rather stay with mum for now. For all intents and purposes, she is “halter-broke” now, but no breaking was required – just trust, patience, and curiosity from both of us.

No Pressure, No Fear: Teaching Your Young Foal to Lead – Part 3